Hey looks like I'm doing another one. We'll see how bored I am, I may actually keep it going for more than like two weeks. 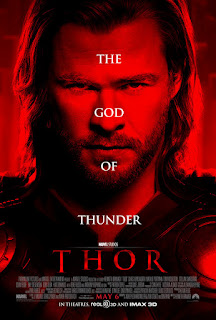 So I finally got around to seeing Thor. Most of what I'm going to say won't be anything new because I'm sure you've already seen the movie. There aren't really going to be any spoilers because the movie is pretty predictable.

The reason I put off seeing Thor for so long is because of the trailer. I know you're not supposed to judge a book by its cover but that cover looked god awful. I'm not huge into Norse mythology but I did enjoy Thor in Marvel's comic representation. From the trailer it seemed they went too pristine, too high class, too "everything has to be shiny". Yeah I know they are gods but I had a different idea of the look and feel to the film floating around in my head. I guess I was just hoping for a more grittier version. Honestly, I imagined Odin as being a little more grizzled and for the lack of a better term, decrepit. I mean Odin would still be epic but in a sort of wise, solemn, Dumbledorian way (pre-Michael Gambon, back when it was still Richard Harris). I also didn't think Chris Hemsworth could pull off being the God of Thunder, so that detracted from the appeal a little bit.

So let's get down to it then. The film was much better than I had anticipated, granted my expectations were quite low but it was still a pleasant surprise. Thor (the film) had plenty of action and some amazing visuals and I loved the prologue-type thing to get things rolling. Yeah it's a huge cliche when there is a caption of "Sometime in the past" and you get to see the back story but in this case it was different, it was narrated by freakin' Sir Anthony Hopkins! He's got one of those epic voices; I would say in the same field as Morgan Freeman or James Earl Jones. Basically it was just Sir Anthony telling a young Thor and Loki an old story but that doesn't really matter right now. Another great thing about the film is that there isn't an overload of terribly clumsy and awkward romantic scenes between Thor and Jane Foster (Natalie Portman). Kat Dennings is used just enough not to be annoying and it was nice seeing great veteran actors like Stellan Skarsgård and Colm Feore. Tom Hiddleston does a great job as Loki but doesn't really get the screen time the role deserves. Clark Gregg is in yet another Avengers related movie, I'm not sure how many movies he's signed on for but it's got to be somewhere in the double digits. I could ramble about actors all day so let's just stop that....for now.

Bottom line is that it's a solid superhero movie and I think Marvel did a pretty decent job. The action is nice and varied between God-like battles and nice good old fashioned brawls even if there isn't a lot of the latter. Another note, and I'm sure a lot of the Marvel comic fans caught this, but there is a nice little reveal of Hawkeye in this movie. Hawkeye will be in the the upcoming Avengers movie and will be played by the same actor that portrayed him in this movie. I promised I would stop with the actor talk so you can just look him up. The plot isn't great but it holds the action sequences together with some coherence so it'll do.

I'm in a pretty good mood tonight so I'll give Thor....

What Would Steve Do?
Well clearly seeing it in theaters is out of the question now. I would definitely recommend renting or even buying it when it comes out on DVD/Blu-ray, I think it said Sept. 13th? If you're anything like me and would rather eat for the week of Sept. 13th rather than buying the Thor Blu-ray you can just stream or download it. Hell, why wait until then, if you haven't seen it or want to see it again go stream it now. I'll even give you a link Thor. I'm sure there are better sites to stream movies but I'll stick with this one for now.

Steve's Random Facts
I actually have a lot of random information I could spout off in this section but I'm actually getting a bit tired tonight so I think I'll go to bed instead.

On a somewhat (but not really) related note however, I do have to say that I am very disappointed in the fact that Ed Norton is not going to be reprising his role as Bruce Banner in the upcoming Avengers film, instead he'll be replaced by Mark Ruffalo. Mark's a great actor but I don't think he's the right one for Banner.

Another note, I do appreciate the reboot of the Spiderman series but now that they are going back to high school I would have loved to see Mary Elizabeth Winstead as MJ before she gets too old. I don't think Winstead is the greatest pick for Mary Jane, but I love her 'girl next door' appeal and I think she'd complement Andrew Garfield pretty well. Andrew Garfield is the new guy playing Peter Parker/Spiderman in case you didn't know.

Last couple short tid-bits...
- Rene Russo is too good an actress to have such a limited role
- Idris Elba is an epic Heimdall
- Jaimie Alexander is totally hot as Sif; she was in an old and prematurely cancelled ABC Family series Kyle XY