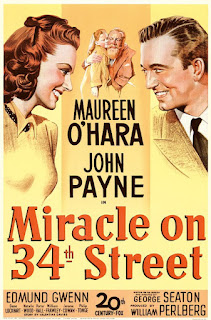 Probably one of the greatest Christmas films of all-time, Miracle on 34th Street (1947) is a story of an old man who claims to be the real Santa and the few people who believe in him enough to defend him.

I didn't include this on my list of Top Christmas films late last year because I still hadn't seen it at the time and didn't think it fair to just jump on the bandwagon.

Edmund Gwenn plays the man himself, Kris Kringle. Kris appears at the Macy's Thanksgiving Day parade and gets hired as the store's Santa Claus. Doris Walker (Maureen O'Hara) hires him but soon finds out he truly believes himself to be the real Santa Claus. Doris does not believe in fairy tales and the like and tries to instill those beliefs in her daughter Susie (Natalie Wood). All the while Fred Gailey (John Payne), a lawyer and Doris' neighbour, tries to win her over. He also helps to defend Kris due to the large number of people believing him to be crazy. Ultimately, it ends happily and Kris is proven to be the real Santa Claus (in a rather ingenious way, yet I'm sure isn't very accurate in a legal sense).

Edmund Gwenn makes such a happy a jolly Santa. The character doesn't do anything magical as seen in most Christmas movies, but he instills the spirit of Christmas, kindness, generosity among the people of New York. I love this movie because it don't make Santa Claus out to be something ridiculous or unbelievable, just someone who is kind, caring, and generally the best person ever, which is exactly as it should be.

There was only one part I didn't like. I didn't really enjoy the very last line of the movie but I can't tell anyone why without ruining it. Although I can say it makes one of the characters seem less genuine.

It is a black and white film and getting a version that is of high quality may be tricky but it is a great story. I loved the message and the humour involved (although the jokes may be a tad old and not as 'hip' as the young folk of today). It isn't a long movie and you can probably catch it any Christmas season on TV. I suggest you take a look this holiday season (or before that if you're like me and enjoy holiday movies all year round) you won't regret it.