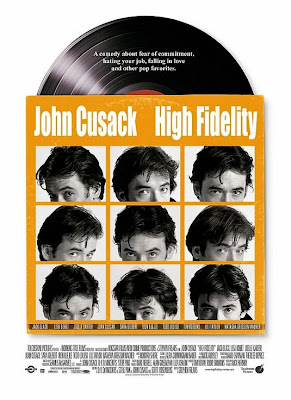 I'm always going to love John Cusack in whatever movie he's in. He's just such a lovable guy and he's real. He rarely plays a character out of the ordinary and always someone we can relate to. In this movie he's a bit of a jerk but it's not intentional he's just confused and misguided. For the guys out there, no matter how much we may think of ourselves as nice guys, we will always have those asshole moments from time to time.

When it comes to relationships, sometimes things don't work out as planned and we find ourselves asking a lot of questions. In short, High Fidelity (2000), is a movie about breakups and it helps to show that we can find the right path even after heartbreak.

Rob Gordon (John Cusack) and his girlfriend Laura (Iben Hjejle) are in the midst of a breakup and go through the awkward moving-out process. Rob really likes to rant about how these girls broke his heart but he's a baby about it most of the time. Rob constantly breaks the fourth wall; it is an integral part and probably my favourite aspect of the movie. He also compiles "Top 5" lists whether it comes to talking about music or just life in general. Anyway, it tells the story of how Rob grows and finds himself again after his romantic struggles.

We get good small parts from Catherine Zeta-Jones, Lisa Bonet, Joan Cusack, and Tim Robbins but nothing overly memorable. Dick (Todd Louiso) and Barry (Jack Black) are Rob's two record store employees. They have a great dynamic as a double act with Todd as the "straight man" and Jack as.....whatever the other half is, I'm just lazy enough not to look it up. Jack Black's rendition of Marvin Gaye's Let's Get It On is pretty awesome and really caps off the movie well.

I used to just like this movie but each time I watch it I learn and appreciate more about it. It's just a really well made film and it tells a believable story. Men in real life aren't perfect like Prince Charming and women and a picnic either. So it's about learning how to separate real life and make-believe. Reality will always be better because fantasies don't exist. Reality also isn't perfect but that's the beauty of it all. Perfection is boring it's the flaws in life and in people that make relationships worth having. High Fidelity, unlike many "real" romantic movies, won't have you weeping by the end. It does, however, entertain and maybe teach a little. Just stopping reading what I have to say and watch it.

Notes:
- Poster image obtained from www.impawards.com
- I'll always remember Lisa Bonet from The Cosby Show
- Sara Gilbert of Roseanne makes an appearance as Anna. More recently (but not lately) she has played Dr. Leslie Winkle on The Big Bang Theory