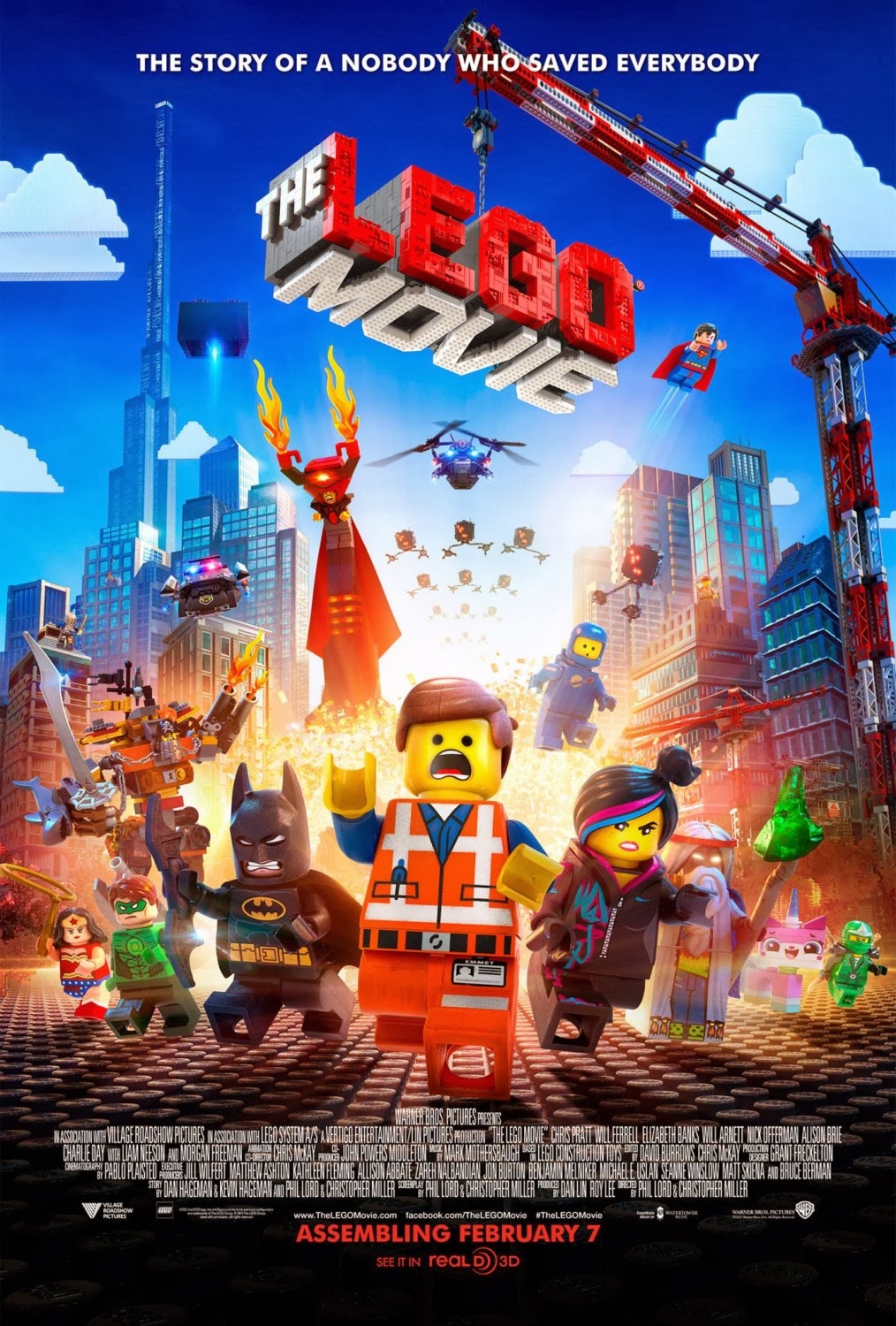 I was definitely excited to see how this movie would play out. It had great potential as one of the building blocks of my childhood. Yes, pun intended. On the other hand, it had the possibility to disappoint generations and generations of children of all ages. I'm glad to report that it gets my stamp of approval and when it comes to portraying beloved childhood memories I am very serious.

As with all animated film, The Lego Movie features an all star cast. Emmet Brickowski, a simple construction worker is our protagonist voiced by the lovable Chris Pratt. His female interest Wyldstyle is voiced by the lovely Elizabeth Banks. For some reason it seemed like an odd choice to me but I didn't think too hard about it. Will Ferrell voices the evil Lord Business trying to use the ancient Krgl relic to stifle all creativity and stop the master builders in the Lego world. The rest of the cast includes, but is not limited to: Morgan Freeman, Will Arnett, Liam Neeson, Alison Brie, Channing Tatum, Jonah Hill, Cobie Smulders, Will Forte, and apparently Dave Franco, Jake Johnson, and Keegan-Michael Key. The last three I couldn't pick out or maybe their involvement simply eluded me at the time. I should also mention that Charlie Day voices my favourite character of the movie Benny, the 1980s space man. Although, Freeman's Vitruvius is a close second with some amazing comedic moments.

Unlike some movies that dredge up the past, The Lego Movie doesn't try to specifically target the older audience with specific jokes. although there are quite a few pop culture references flying about. Instead it is cleverly family friendly but still able to resonate with all ages. What I mean is that in the theatre there wasn't a lot of segregation of laughter at certain jokes. Without revealing too much about the ending, it definitely had a more touching and serious note than I anticipated which of course was immediately followed by another silly joke to end the film.

This movie is already very popular and has already garnered overwhelmingly positive reviews. I don't want to over inflate any expectations for this movie but if you have any sort of fun, whimsical side you'll certainly enjoy it.

Notes:
- Poster image obtained from www.impawards.com
- The song Everything is Awesome is sung by Tegan and Sara featuring The Lonely Island.
- Billy Dee Williams and Anthony Daniels voice their Star Wars characters, Lando Calrissian and C-3PO respectively. Han is voiced by Keith Ferguson. Ferguson mimics Harrison Ford's voice for his characters Han and Indy in Robot Chicken
- Creators Phil Lord and Chris Miller are also directed the Cloudy with a Chance of Meatballs series and the 21 Jump Street reboot series. For those that are much cooler may know their work as creators of Clone High in 2002 (Miller having voiced JFK in the series).