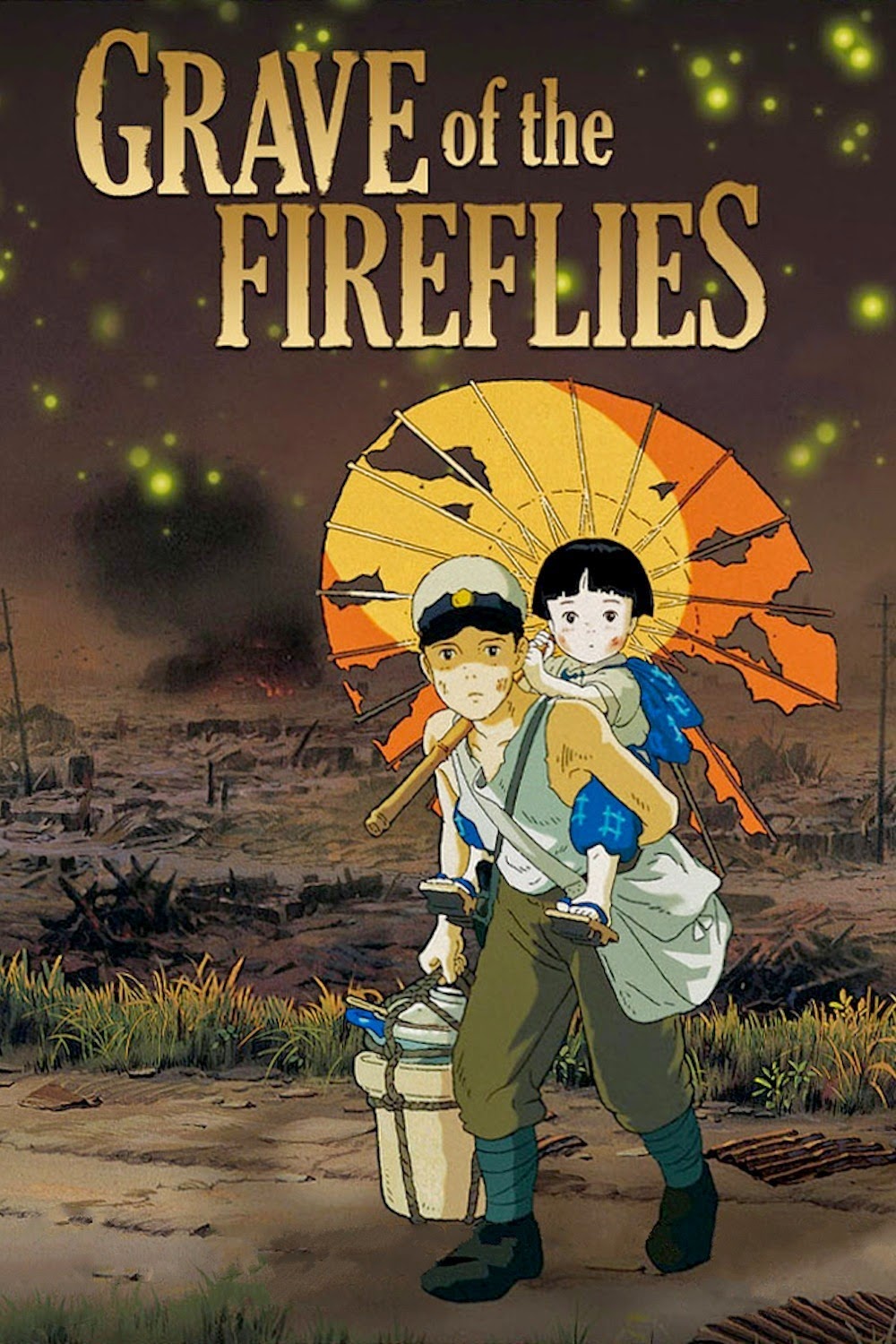 *Update - July 11, 2020 - The only Ghibli film not on Netflix. Everything I wrote nearly six years ago rings true and honestly I probably would have just written a worse post than I did back then so I pat myself on the back for this one*
This is probably the most appropriate use of the phrase "hauntingly beautiful" for any film, let alone an animated one.

I have to admit I haven't seen that many Studio Ghibli films. I counted and I'm only 6/20 (7/21 if you count Nausicaa of the Valley of the Wind *Currently 12/21 in 2020). Also, this is the only one I've seen from director Isao Takahata. Ever heard of him? I don't blame you. Hayao Miyazaki is pretty much synonymous with Studio Ghibli these days as he brings in the big bucks.

I first saw Grave of the Fireflies, many years ago and it gives me chills every time I think about it.

This story follows the 14-year old Seita and his younger sister Setsuko leading up to and immediately following World War II in Japan.

The movie starts on September 21, 1945. This is the day Seita died (This is seriously how it starts so just a warning this movie is tremendously sad).

After their mother dies in a fire bombing. Seita and Setsuko go to stay with their aunt. As time passes, Seita's reluctance to do any work and having the nuisance of Setsuko around, their aunt starts to label them as burdens. Being too proud to stay, Seita decides to go find a place for him and his little sister. Having no plan and a misguided teenage view on how things should work, their life together quickly falls apart.

It has been labelled as an anti-war film by many but I respectfully disagree. Yes, that is definitely one of the themes of the film but it's not what the film is about. The film is about the relationship between a brother and his sister. Seita wants to protect his sister but often doesn't have the means to or just doesn't know how. Setsuko never wants to be alone; she craves time with her older brother. Seita is the same way but it is more subtle. In one scene Seita is seen wanting to cuddle with his sister, longing for comfort and companionship, afraid of being alone. Their bond is seen throughout the film and is highlighted in the opening and closing scenes.

Often in these stories, through hard work and determination the protagonist will prevail and everything will be right in the end. Seita is a 14-year old kid who is too proud and lazy to survive and properly provide for his sister. This movie drives home certain realities of that time and the horrible conditions, which is where the anti-war part comes in. It is so realistic in part due to the nature of the content as well as being based on the the semi-autobiographical novel of the same name written by Akiyuki Nosaka. Nosaka said that the novel is a personal apology to his sister and describes his sister's death in an interview in Animerica.

This movie did not do well at the box office and it's obvious why. Not only was it opening opposite another Ghibli film My Neighbor Totoro but Grave of the Fireflies attempted to sell death and war to children. That being said, Ghibli didn't start to break box-office records until the early 90s.

Nevertheless, I'm glad the studio was able to release a film like this because many studios wouldn't. It's an evocative story with a haunting twist on the protagonists.

It's not always the right time to watch an insanely depressing movie so take care to watch it in the right frame of mind. But I do want you to watch it. This movie is beautiful and brilliant in so many ways and you don't want to miss out.