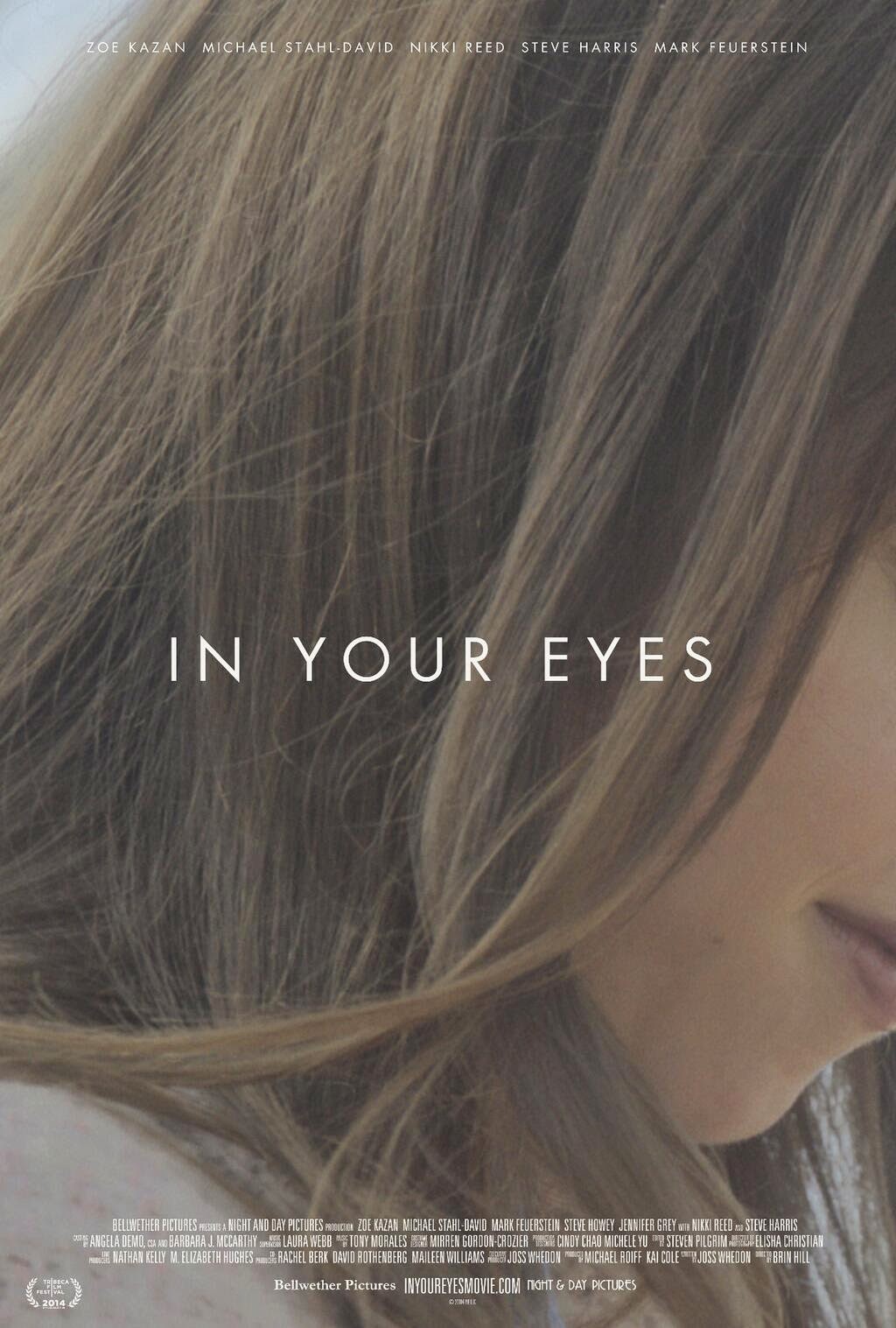 A surprising Joss Whedon written film that flew under my radar until I went searching for something to cleanse my palate.

Directed by a relative unknown, Brin Hill, but backed by a Whedon script,, In Your Eyes definitely showed some promise. I wasn't quite sure what to expect. Actually that's a lie, I thought it would be hilariously cliché and predictable but that is just what I needed at the time.

The story revolves around Becky (Zoe Kazan) and Dylan (Michael Stahl-David). We see them in polarized environments as kids. Dylan is a smart kid but hangs around the wrong crowd while Becky is an introverted girl, apprehensive of the big bad world around her. One day something amazing happens and they form a telepathic bond from across the country.

Anyone ask for nachos? Because things just got cheesy.

Twenty years pass and they have found themselves on wildly different paths. Becky is married to a very successful and wealthy doctor Philip (Mark Feuerstein). Unfortunately, our man Dylan has recently gotten out of prison and longs for better prospects than his dead-end employment at a car wash. This is when the connection starts to become more apparent. They start to see, hear, and experience things happening in each other's lives and it freaks them out (as it should). The start building a relationship without direct contact and it makes them question the lives they lead.

After watching it, I read a review that discussed the fact that the obstacles between them finding each other weren't great enough. I wholeheartedly agree but I think it comes down to the characters rather than the story itself.

Let's start with Dylan's life. He has two old "friends" Bo and Lyle who are petty criminals and get him into trouble at every turn. The problem is that they aren't developed into anything more than that. The pair are simply a vehicle to deliver plot points. Also, had Donna, played by Nikki Reed, been compatible with Dylan in any way other than that she's hot, it would have provided a more robust challenge in leaving. She had more acting chops at 18 when she was in The O.C.

Now onto Becky's life. She literally does nothing. Okay that's unfair, there is a lot that goes into taking care of a household on a day to day basis especially when your partner's job is very time consuming. But when you combine the fact that they have no children, her having no discernible relationship with anyone, and being married to a completely unlikable ass of a character in Philip, they make it too easy for her to just lift out of her environment.

In Your Eyes has a drama label but it doesn't provide enough struggle to earn that title. Character development was just too superficial beyond the two stars. Becky and Dylan have no attachments (other than her husband) due to Dylan's prison time and Becky's reluctance to delve into any other relationship than the one in her head. Both of them are blank slates and the ending shows a new beginning that has no direction. I guess those happily ever after, Disney endings really don't translate well to live-action.

Side Note: I knew Jennifer Grey had work done since her Dirty Dancing, Ferris Bueller days but I didn't notice that she was in this movie at all until I saw her name in the end credits

Now that I've gotten the negative out of the way I do want to leave you with some positives.

The supernatural plot device of a telepathic link seems like it would be awful to watch but it plays out quite well. Zoe and Michael have some decent chemistry but I find she has the charm to carry the film. I am immensely biased because I think she's amazing so take that with a grain of salt. The director did a great job making it seem like they were interacting very naturally despite never being in the same place until the end. He accomplished this by having each of the actors hidden in the scenes, rattling off the other side of the dialogue while the other was shooting (Fun fact: Zoe filmed all her scenes first so she playfully says this made her job harder).

The watching experience was enjoyable, it always is for me and rom-coms. While I applaud what Joss tried to do, the screenplay wasn't as flushed out as it could have been. The supporting cast was merely subservient and the movie felt a bit hollow at times because of it. It left me feeling good but if you like Zoe like I do, do yourself a favor and check out The F Word or Ruby Sparks instead.