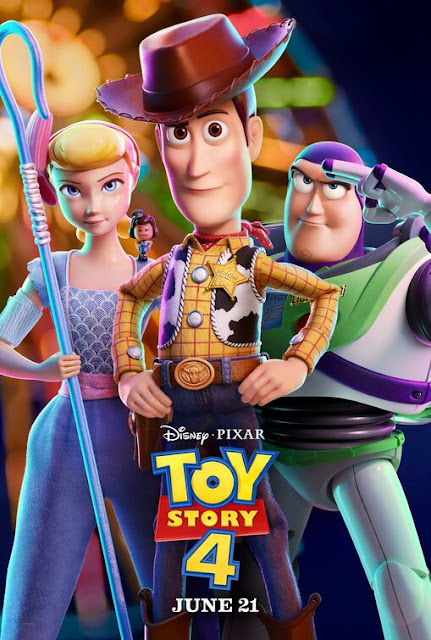 When I had heard that they were making a Toy Story 4 back in 2015 I was torn. I love Toy Story with all my heart. It may be my favourite film franchise as a whole, at the very least it evokes a lot of nostalic feelings. Toy Story 3 had ended in such a great way emotionally and it wrapped up the Andy arc with his toys.

When they announced that the story would revolve around Woody and the long lost Bo Peep I became skeptically optimistic. Those who know me know I am a huge sucker for romance in movies so they already hooked me.

It has already been 9 years since Toy Story 3 and a whopping 24 years since the original (yes we are all that old) but the story picks up pretty relatively soon after the events of Toy Story 3.

Toy Story 4 supposedly starts two years after the events of Toy Story 3 when Bonnie is about to start Kindergarten.

Building on the somewhat self serving mindset of Woody, the movie starts out with him needing to be needed. Woody stows away with Bonnie at Kindergarten orientation and makes sure she isn't alone and that she makes friends at school. She did in fact 'make' a new friend and brought home the toy Forky (Tony Hale) she had made from a spork and other crap.

Hilarity ensues, in a bit of a tiresome running gag, where Forky keeps throwing himself in the trash and Woody keeps having to keep Forky out of trouble for Bonnie's sake. The real meat of the movie comes when Woody reunites with Bo Peep who he hasn't seen in 9 years (20 years in our time). They come across Gabby Gabby (Christina Hendricks), an old 1950s pull string doll, in an antique shop and she kidnaps Forky with her band of creepy ventriloquist dummy henchmen. The gang has to rescue him with the help of a now a kick ass Bo Peep who shows Woody a thing or two about how to get things done.

They brought back the regular voice cast of those characters remaining save for Don Rickles who had passed away in April 2017 before recording any lines. They had to scrounge previous movies and unused dialogue Rickles had recorded over the years but they made it work. Annie Potts returned as Bo Peep and they added Tony Hale as Forky. They had a few short lived cameos that I would have loved to see more of. In a closet scene, Woody speaks to a quartet of old toys voiced by comedic legends Carol Burnett, Carl Reiner, Mel Brooks, and Betty White. Joining the cast for decently large roles were Ducky and Bunny (Key and Peele) and Duke Caboom (Keanu Reeves). Keanu was pretty solid but Key and Peele stole the show and did exactly what I expected, be hilarious in the way only they could be.

I sat in the theater pensively watching the credits and thought to myself "I absolutely loved it". Now having a little time to reflect, that hasn't changed however there are a few issues and differences I would like to point out.

Here is a warning that I will be talking in vague spoilers but spoilers nonetheless.

Firstly, I am not sure if I am just getting older and more jaded but I've just now noticed that the movie follows the same plot formula as all the other movies. A toy gets kidnapped or lost and the group has to find a way to rescue them. Someone has an epiphany, a revelation, and their life is changed forever because of friendship or whatever. Maybe that just shows that for such a long time I have been able to turn off my brain and all adult logic whenever watching movies. It does make things more enjoyable. I mean yes I am nearly 30 years old and I am not the exact demographic anymore but still kids deserve some originality too.

I had also realized that this movie does not have a true villain. In each of the previous three movies the antagonist never won and simply got what they deserved in the end. Sid got scared to death and I assume he has PTSD for the rest of his life, The Prospector got to live his worst nightmare being picked up by a young Barbie enthusiast, and Lotso gets strapped to a garbage truck forever doomed to pick bugs out of his teeth. Gabby Gabby has no such ending. She actually gets what she wants and you begin to feel for the character. This is in fact the opposite of an issue for me but an interesting difference from the previous films.

Finally to get to a spoiler, Woody leaves the group to spend the rest of his days nomadic, without a kid, and with the love of his life Bo Peep. As a romantic sap, I loved this but ruminating on the consequences I don't like what the implications of this might be. Since this was such a Woody-centric plot line (I mean they all are) and the main cast of toys were purely secondary, I would gather that they have more stories to tell and expand on. They still have the head duo of Jessie and Buzz but if they continue the series without Woody, which I highly suspect they will, they will be entering some very dangerous territory. Like The Office without Michael, That 70's Show without Kelso and Eric, Scrubs without all the funny people, it could end disastrously. I would hate to see the beloved, nearly perfect franchise being reduced to just a pandering money grab.

Lastly, just so I can put some distance between the spoilers and my ending comments, Forky gets a lot more screen time that I would have liked. I know he is the emphasis of the story but he is on screen nearly as much as Woody and more than any other character (I don't have the numbers on that but I am trying to make a point). I love Tony Hale and he does a great job, but there is only so long I can stand looking at a spork.

As much whining as I did in the section above, I truly did love this movie. Some people might disagree and now more than ever I would be able to understand why. I am not sure where I would rank this movie in the series, they are all phenomenal. I think I will have to re-watch them all again now to make that decision but it is definitely not taking the top spot for me.

The series is likely to live on and although I don't like that a Toy Story 5 seems inevitable Disney-Pixar have proven me wrong in the past and I hope they do again.