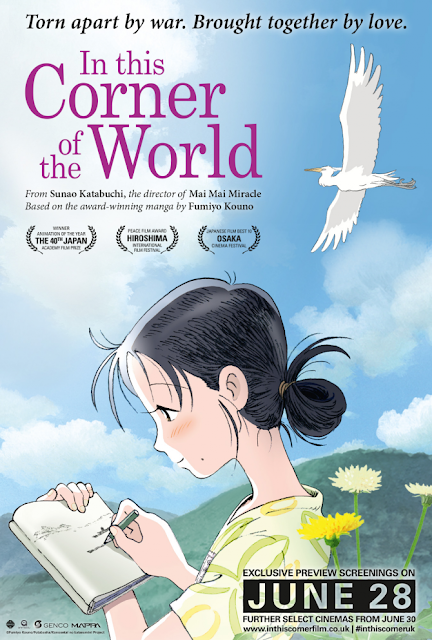 From writer and director Sunao Katabuchi (notably an AD on Kiki's Delivery Service) In This Corner of the World is, what I can only assume, a pretty accurate depiction of everyday life up to, during, and after the horrific events in Japan during World War II.

I would not have thought I'd have watched another animated movie about World War II Japan but here we are. This one is a little bit different than Grave of the Fireflies. By nature they are both going to be depressing and heavy due to the subject matter but there is something distinctly uplifting about the character arcs throughout In This Corner of the World.

Quick spoiler for Grave of the Fireflies, the main characters are a young boy and his even younger sister. After the war they are abandoned and try to survive. They don't learn anything and they both die. Pretty brutal I know. I wrote a whole post about it here. Anyway back to the movie at hand.
The movies starts in 1933 and follows Suzu, a young girl growing up in Hiroshima who would rather draw and sketch than do anything else. As she becomes of age she is married off into a family to help them with household chores and taking care of the family. Over the course of the war, reduced rations, air raids, and living a life she never thought she'd live force her to fight just to survive.

The general plot you should already know if you have taken any world history course but interestingly enough (or perhaps not interesting) the finer points of the plot are quite mundane. A lot of the story revolves around Suzu's struggle to learn how to become a wife, a house keeper, a cook, and anything else that is needed of her. At 129 minutes, it it's pretty long for an animated film and in it might even seem longer. I know that's not necessarily a good thing but I found it oddly calming and a glimpse into a mostly realistic albeit fictional depiction of life at the time.

There is very little action for being a war time movie. It is set in Hiroshima to start but Suzu moves to Kure when she marries into her new family. For me one of the most striking moments was when the bombing in Hiroshima occurred. Since the story was centered in Kure at the time it was not directly affected by the blast. The family was just around the house doing chores when they saw the flash of light. It was eerie how disconnected they seemed to be for a brief moment.

The animation style is less colourful and fantastical than a Studio Ghibli movie but they are trying to go for realism so anything Ghibli is pretty much out of the question. I am not sure if my eyes were deceiving me but I am pretty certain that the intro slates (the Suzu growing up montage) are animated a little more simply and at a lower framerate. Perhaps to show that this is a more simple time in her life. I watched a video explaining a similar theme when they were animating Spider-Man: Into the Spider-Verse they animated Miles Morales at 12 fps but everything else at 24 fps. Mainly to give it a crisper more comic book panel feel to it but also show that he's not quite so smooth in the beginning. Well enough on that tangent.

I know I jumped around a fair bit here but I think this movie is above all else, important. It may not be the most entertaining and some would call it down right boring. I think it is important that we see how the other side lived in one of the darkest times in human history. When your home soil is a war zone it changes your life but sometimes in a gradual enough way to change your entire perspective on life without you realizing it.

It's not for everyone but I think the story is beautiful and a little more digestible than documentaries. It's on Netflix now and if you can sit through it, it will be worth it.

Also a random note, there is O Come, All Ye Faithful playing in the first scene and I am not really sure why.