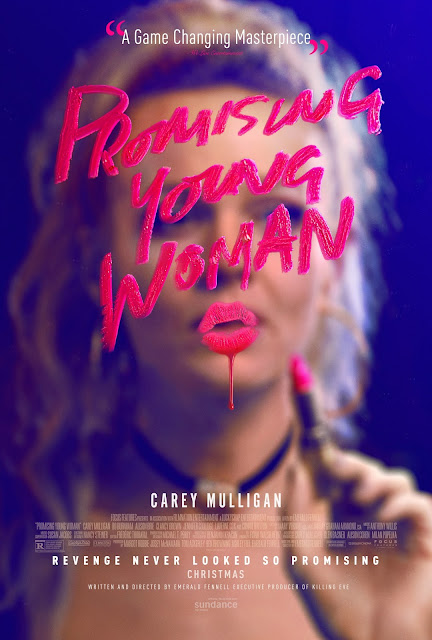 Promising Young Woman is a dark-comedy mixed with mystery thriller. Emerald Fennell's feature directorial debut is a story of anger and revenge but not in the same way that something like Taken, John Wick, or the 'manly' revenge stories are. This one is a little more menacing. It is more grounded and thus more potent in a way.
Trigger warning, this is a story of sexual assault and rape, and how it obliterates the lives of women with having little or no consequence for the men perpetrating the crimes.
The title plays on the label given to Brock Turner as a 'promising young man' leading up to his 2015 conviction for sexual assault.
I won't be delving deep into it. I do have a lot of thoughts on rape culture but that is for another venue, I do actually want to talk about the movie at some point here and I would never get to it if I went down that rabbit hole.
This is a movie that I had been waiting since early last year. Originally premiering at Sundance on January 25, 2020, it released to North American theaters (not that I was going to any) on Christmas and just today via premium streaming.
We first meet Cassie (Carey Mulligan) heavily intoxicated at a bar when nice guy Jerry (Adam Brody) tries to help her home. Surprise, surprise, Jerry's intentions aren't so innocent as he tries to take advantage of her but Cassie has a surprise of her own. She's not drunk.
Cassie has her little hobby of acting drunk and helpless and flipping that menacing switch when these 'nice guys' show her their true selves after taking her to their place from a bar or club. We never see her actual hurt any of them but along the way instilling at least some fear into some would-be rapists.
Cassie is a med school dropout and when she isn't playing this dangerous game at night, she works at a coffee shop. She has lost her way.
She meets former classmate and now doctor Ryan (Bo Burnham) and they have a charming repartee and a budding romance begins.
I can't in good conscience say any more about the movie because it would take away from some of the poignancy. Is the deepest and most life altering of movies? No, but it's pretty good so I don't want to spoil it for you.
There are some twists and turns not only in regards to plot but in regards to tone as well and it seems entirely on purpose. I knew the general path the movie would take but it did surprise me a few times. Some in small ways others in much bigger ways.
The female-led soundtrack and the ominous score give us some of the first hints of this. The intro credits roll to Boys by Charli XCX and if you didn't know anything about the film you might think it to be a teen bubble-gum rom-com. It shifts back and forth between some ominous scoring and some songs like Paris Hilton's Stars Are Blind and a dark orchestral version of Britney Spears' Toxic.
Also, from a production stand point the colour scheme is wonderful. Chris Stuckmann says it quite well comparing the colours to candy. It is opposing the dark subject matter and I like that.
If you know anything about me, I love me a Carey Mulligan performance. She is brilliant in turning on the charm, being funny and witty when she needs to. She can also flip the switch and be methodical and malevolent when she has an agenda. You see her up and down, and also completely unravel and I love it.
Bo Burnham brings some levity to the movie which I think is a good thing. The subject matter is pretty dark and really tough to watch at times. Without him, and the chemistry between him and Carey, I think the movie wouldn't be nearly as palatable. Seeing him being an actor is a little off-putting but he is mainly just a subdued version of himself and his comedy stylings so it makes sense.
Alison Brie is entirely unlikeable as another med school classmate, which is a good thing. Clancy Brown and Jennifer Coolidge play Cassie's parents and although I would have loved to see Jennifer stretch those comedy chops, it really wouldn't fit the movie very well. I admit, I do not know Laverne Cox's filmography very well but she is great as Cassie's boss and friend Gail.
There are a few cameos and bit parts that may pique your interest. Molly Shannon, Connie Britton, and Alfred Molina appear in just a handful of scenes between them but they are pretty poignant in the context of the story. I do have to say though that Molina's scene was a little out of place for me. Not that it exists but more of how it was handled. Christopher Mintz-Plasse, Max Greenfield, and Chris Lowell appear different points as some other 'nice guys'.
The pacing of the movie is pretty solid, you could argue to cut down a couple of scenes or bring it down maybe 5-10 minutes but it works as it is. The movie is sectioned off using roman numeral slates but it's really Part III and IIII (don't worry it's like that for a reason) where things really started to surprise me. I think Carey really brings it in this one and while the story can be a bit tough, chaotic, and unexpected I really do think it's a good watch. It's a little pricey as is at $24.99 CAD to rent but if it ever drops in price or comes to a streaming service near you, I'd certainly recommend it.