I saw a trailer for this movie a few months ago and was very excited to see it. It didn't really have the widest release to start so I don't think it came to most theatres. I think it should be out in theatres here now though. That being said, I clearly didn't pay to see and there is a pretty nice screener version you can stream or download. You can buy a copy or find it on Netflix and the like, I'm sure. 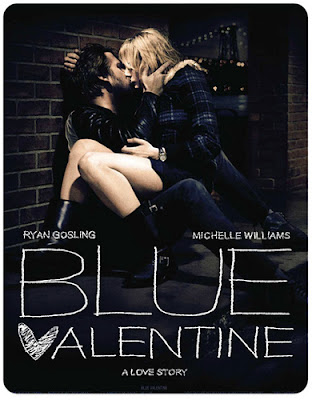 Blue Valentine sounds like your generic rom-com but that's not really the case. It's a pretty powerful movie that takes a pretty realistic look at life in relationships. It shows the not so cliche (okay a little bit cliche) falling in love sequence interlaced with the reality of marriage after the initial infatuation seems to dissipate. A lot of romantic comedies these days enjoy showing only the falling in love, guy gets girl parts of a relationship, which is fine but ultimately inaccurate in most cases. Don't really want to do the research but what like....half...ish...of marriages end in divorce? In any case these days it's not looking too good on the whole 'til death do us part' front. The only movie that seems to come close to the reality of this film, in recent years, is 500 Days of Summer, and that only shows the happy spin on reality. It's a different kind of movie but shows the same sort of frank truth about things. I enjoyed both films but Blue Valentine is a bit darker, a bit more intense, because that is how a relationship is sometimes.

The stars Michelle Williams and Ryan Gosling seem to have great chemistry on-screen and it shows in their performances. They really seem comfortable together so it rubs off in how real their scenes together are. The movie starts with Ryan Gosling's character Dean looking a little worse for wear over the years of a marriage. He means well but somehow kind of lost it and became a little too intense. Williams' Cindy is very much trying to lead a normal life desperately vying to tame Dean's fairy tale behavior. It is a roller coaster ride, as you can probably relate to at least some part of this movie, and you just get sucked in along the way. I was never the biggest Michelle Williams fan since she was one of the co-stars of Dawson's Creek......but I was able to look past my hatred of that show to see a really great performance. She has been nominated for another Academy Award with this spectacular show here and I say it is quite deserving. I've always liked Ryan Gosling and very much enjoyed his acting in this one as well. He didn't get nominated for it but I'm sure there will be more to come.

There is an interesting performance by Cindy's ex-boyfriend Bobby, played by Mike Vogel. You have probably never heard of him as he is just starting to emerge in some bigger roles but he plays the perfect asshole in this movie. His charming good looks make him easy to like but his jerk like behaviour makes it so much easier to hate him. He was pretty funny is another 2010 movie She's Out of My League, starring Jay Baruchel and Alice Eve.

Enough of my rambling about nothing of real importance. I would say it's a pretty great film, I would even suggest watching it in theatres buying it if you can. I would be a little against watching it on a first date, it would be a little bit of a mood killer. However, if you are comfortable with your significant other by all means go see it. It is a bit intense so don't expect a Love Actually or Valentine's Day butterfly feeling in your stomach....it's not going to happen....maybe for like a minute then you'll see a balding Ryan Gosling looking probably as unappealing as DeNiro at the end of Raging Bull or when Jared Leto gained 70 pounds for Chapter 27. All in all a great movie, I strongly recommend it, and surprisingly enough I may actually buy it on DVD someday.

(Update: February 11, 2013)
I did not buy it on DVD, but nothing is stopping you. Looking back I realize that I've gotten pretty lazy with my posts lately and that I really went all out before.

Random Facts
- Michelle Williams was previously nominated for an Academy Awards for Best Supporting Actress in Brokeback Mountain.
- Ryan Gosling was nominated for the Best Actor Academy Award in Half Nelson (2006)
- Gosling was part of the last new group of Mouseketeers in The Mickey Mouse Club along with Britney Spears, Christina Aguilera, JC Chasez, and Justin Timberlake
- Williams was engaged to Heath Ledger and they had a daughter, Mathilda Rose, together. They officially separated in September 2007.