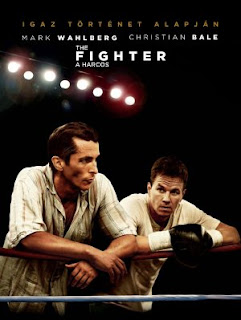 So this is my first movie review, critique, whatever you want to call it. I'm not sure how this is going to work exactly but I'll just share my opinion and research out of boredom mostly. The majority of what you'll read here you can probably read on Wikipedia. This will probably contain spoilers so...I don't know, read carefully I guess.

The Fighter (2010) is a film about the true story of trials and tribulations of a not so young "Irish" Micky Ward. This movie has a pretty solid cast. Mark Wahlberg plays the titular character, while Amy Adams plays his love interest Charlene. I think the best performance of the movie comes from Christian Bale who plays Micky's older brother Dick "Dicky" Eklund. Christian Bale usually steals the show in the movies he's in but usually he is the star....so he's supposed to. That being said Marky Mark put on a great show too. I mean Mark and Amy are probably not going to get many acting awards for this movie but that's okay because it's still entertaining.

The majority of rest of the cast in the movie are Micky's family. He apparently has like 7 sisters or something. They are really easy to hate, as well as his mom Alice. Of course the point is to hate them so it came off quite well.

The fighting scenes were pretty good but the build up of fights until Micky's shot for the title is probably the most cliche sequence you could imagine for boxing matches. Another movie that does this is Cinderella Man, also a great movie, in my opinion a stronger movie and Russell Crowe gives a better performance that Mark but that's something for another day.

You can probably guess the ending right now before you've even seen the movie. Micky gets beat up but surprises everyone and wins the championship....didn't see that one coming.

In my opinion, you should see it. If it's still playing in theatres when you read this then by all means go see it. If you are a poor student like me there are plenty of DVD quality screener versions you can stream and/or download.


Random Fun Facts (I got extra bored, sue me) - Probably would only interest movie detail freaks like me.

- Mark Wahlberg hired Freddie Roach as his personal trainer and also worked with world champion boxer Manny Pacquaio
- Wahlberg was attached to the project as early as 2005 but complications halted production
- Christian Bale has already won a Golden Globe for Best Supporting Actor, as well as a slew of other awards
- Sugar Ray Leonard makes a cameo....as himself.
- Dicky Eklund was originally supposed to be played by Brad Pitt (anyone say he can't play a boxer? Fight Club or Snatch.)
- Darren Aronofsky was the original director but pulled out due to his involvement in other films, notably Black Swan
- David O. Russell replaced Aronofsky, providing creative touches like he provided in his films: Three Kings and I Heart Huckabees