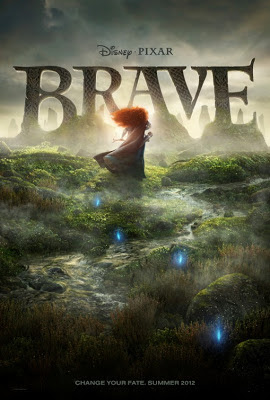 It took me a while to finally see this movie and despite some iffy reviews from certain people, I definitely loved it. It's not that people gave Brave bad reviews they just didn't see it as revolutionary as say Toy Story or Finding Nemo. I definitely agree with that but not every movie needs to redefine the bounds of animated film. With many Pixar movies, the stories are rather different than some of the Disney classics. I love the classics that had a mix of fantasy, comedy, and good old family-oriented morality. Brave shows flashes of the old hand drawn Disney animation of the past.

The cast is incredible and I love any chance to watch something with Billy Connolly in it. I really think that it's not quite so much the voice acting but the characters that really reel you into the film. Each character has their specific role. Whether it's to add comedy relief (which to be honest is most of them) or in Merida's case to portray a strong female character that doesn't want to be restrained by tradition. I think I lot of people can relate to being chained by parents, by peers, or by societal norms and pressures and it really does give the young generation great ideals to (attempt to) hold onto as they grow up.

I didn't believe people when they said Brave was "scary" and although it's not anything I'd consider scary, I also laugh out loud whenever I watch The Exorcist so I'm a special case. It does have some intense moments that may not be suitable for the very young kids. This movie has more of a shock factor "scary" rather than say Toy Story 3 that has more creepy head turning baby, symbol crashing monkey, nightmare inducing "scary" moments. That being said this is all relative to children and for adults it's nothing you haven't seen before, especially with the filth and smut in media today.

Anyway, I think Brave is a great addition to Pixar's already great portfolio of films and although it's nothing groundbreaking it's definitely worth a watch. It has a great to be learned as well being fun and entertaining for  all ages. Although try to keep your wee ones from watching it until they are a little older.