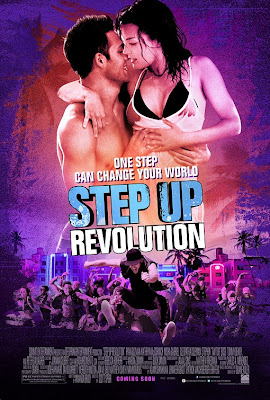 The fourth installment of our favourite dance series. This time the dance moves move to South Beach for constant slew of scantily clad perfect looking girls and guys and none of the American obesity to be seen. I find that I am harsher with movies when I watch them with other people so unfortunately this review isn't going to be pretty.

First, let's go over the redeeming qualities of the movie. Moose (Adam Sevani) appears for about two minutes at the end.....That's about it.

Okay, I'm being a little unfair. There are some pretty amazing dance routines in Step Up Revolution but none of them really stick out for me. I admit that I have now seen all four Step Up movies but my favourite is Step Up 3D. It is clearly not because of the great plot or impeccable acting because there is none of that throughout the series. I just like the dancing in the third one because it highlighted a lot different dancing styles, giving a lot of different performers their moment in the spotlight. In Step Up Revolution it all seemed to kind of just melt together for me. The plot is the same tired story we've seen in past Step Up movies and I have a real problem with the computer effects in this one. They are terrible. Just plain terrible. When you can clearly see parts of the scene where the CGI is put in, someone isn't doing their job. As to be expected there are so many cliches in the story that its futile to try to keep count.

It's not all bad though, there's a lot of sex appeal throughout the film. Also, the artistic direction they were going for was a good idea it just didn't quite pan out in my opinion. We also see a lot of our favourite dancers from the series return for the final number.

It's still an enjoyable movie but I wouldn't pay any amount of money to see it. Even if someone paid me a few dollars to watch it I probably wouldn't, my time is more valuable than that. However, if you like pretty nicely choreographed routines that aren't really anything new and a plot more tired than a new mother after a long labour (yeah....unfortunately I went there), then this movie still probably isn't for you, but it's good enough.