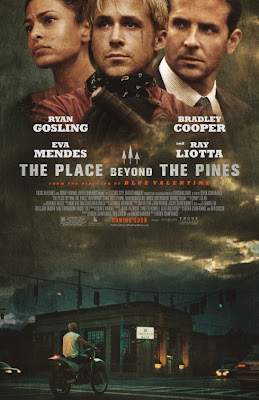 I kind of had high hopes for The Place Beyond the Pines. I like director Derek Cianfrance, despite only really directing Blue Valentine before this, but there were a few things that didn't quite fit in my opinion. Firstly, I have to describe it as a mix between Blue Valentine, Drive, and The Departed. Although maybe I'm being influenced by the fact that Ryan Gosling is in two of the three movies listed. Before I get too into my spiel, I'll give you a quick synopsis or teaser if you will.

Luke Glanton (Ryan Gosling) is a daredevil motorcyclist traveling with a fair when he runs into Romina (Eva Mendes), an ex-lover, and he soon discovers he has a newborn son, Jason. He decides to stick around and try and provide for his family but he only has one real skill. He proceeds to rob banks using his motorcycle for a quick getaway. Avery Cross (Bradley Cooper) is a rookie cop who gets tangled up with all of this as well as the seedy underbelly of the Schenectady Police Department.

I don't want to get too into the plot because I don't want to ruin it but I was a little disappointed in the lack of screen time between Ryan and Bradley. You just have to watch it to know what I'm talking about.


The music was a bit hit or miss. The ominous score was blatant in many scenes and was often overbearing, most scenes didn't really warrant it. I would have loved softer, more simplistic music during the suspenseful moments. I did however very much enjoy the song Snow Angel by Mike Patton that played a couple times throughout the film. It is a very soothing instrumental that came up mainly when someone was peacefully riding a bike down an empty road.

The two males leads put out great performances but by no means their best. Ray Liotta had a small part and nailed it because he is so suited to play the perfect scumbag. Ben Mendelsohn played Robin, Luke's accomplice in the robberies, but his character didn't amount to much. He was just a means to keep the plot moving but not to add anything to it. I thought Eva Mendes fell a little flat in some parts and most other characters (and actors) seemed to fall by the wayside. However, I do want to talk about young actors Dane DeHaan and Emory Cohen. I liked DeHaan's performance as teenaged Jason and I definitely thought it believable he was Luke's son. He had a brooding reserved darkness to him. On the other hand Cohen, who played AJ Cross (Avery's son), was a huge douche bag who seemed nothing like either of his parents. All I could see is that he was a jackass from New York. I'm not sure why he was written this way, but I digress.

I thought most of the movie was well done and entertaining but a little rough around the edges. It is also pretty long at 140 minutes, especially since it is paced rather slowly. If you want to watch a film similar to The Departed but a bit slower, a little dirtier, and more family oriented (and no I do not mean that it's for kids), then I would very much suggest seeing it while it's still in theaters. Otherwise, I'd wait until it comes out on DVD and Blu-Ray and watch it then.