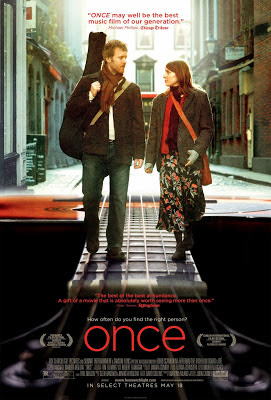 Anyone who knows me, knows I am a big sucker for music of the indie/folk persuasion and it's even better when it's the basis of a movie. Once (2006) features a great mix of music and romance. It's not a musical it's simply a story about music.

The protagonists of our story, known simply as Guy (Glen Hansard) and Girl (Markéta Irglová), meet while he is playing a heartfelt song in a Dublin street. A spark ignites between them and they start discovering more and more about each other. She has a child with another man and he has been left brokenhearted by his ex-girlfriend back in London. Ultimately, they end of being exactly what the other needs.

It is a very simplistically shot film which suits the genre and the people well. The music heard throughout the film is of course phenomenal and so emotionally potent it's hard not to feel what the characters themselves feel.

It's one of my favourites and although it paces rather slowly, it's well worth the 90 minutes of time invested in watching it.

Notes:
- Made on a mere $160,000 (mostly for the Irish Film Board and from director John Carney) the movie ended up grossing over $20 million worldwide.
- "Falling Slowly" written by Hansard and Irglová, won for Best Original Song at the 2008 Academy Awards.
- Hansard and Irglová dated for 3 years after filming Once.
- John Carney wrote the screenplay semi-autobiographically, remembering his time in Dublin in a long distance relationship with his girlfriend.
- The flashback clips of Guy's girlfriend are actually of director John Carney's girlfriend.
- Of the two leads, only Hansard had any experience with acting (A small role 15 years prior). They are both professional musicians.