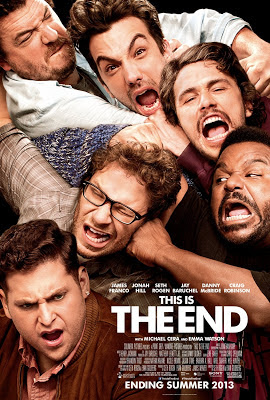 The apocalypse after a party at James Franco's house? This is the perfect example of why ensemble casts should be assembled. Apart from movies like say Ocean's Eleven (both original and reboot) this sort of ridiculous cast should only appear in movies that don't take anything seriously.

There is a long list of small parts and cameos in This Is The End. We have Rihanna, Michael Cera, Emma Watson, Channing Tatum, Jason Segel, Paul Rudd, Kevin Hart, David Krumholtz, Aziz Ansari, Mindy Kaling, Christopher Mintz-Plasse, and...that's all I can think of right now...oh yeah and Martin Starr. If you don't know who that is....that's perfectly fine (but seriously he's pretty cool). They all play themselves, but a weird, messed up, freakish version of themselves. My favourite small performance is from Michael Cera who is hilariously awkward and weird but in a way you probably haven't seen before.

The story of the movie follows the core cast of Seth Rogen, Jay Baruchel, James Franco, Jonah Hill, Craig Robinson, and Danny McBride (all seen in the image above) as they try to survive the disaster and doom that has befallen the world, but more importantly the Hollywood Hills.

I thought things were a bit forced in the beginning of the film but later on they explain why. The pace is a little all of over the place as is the plot (but that can be overlooked) so there are going to be things that are unexpected. Ultimately, it's the funniest and probably weirdest movie I've seen this year. It's filled with a lot of hits, a few misses, and all the messed up stuff in-between. Be warned though, This Is The End is crude, offensive, and insanely inappropriate so it won't be for everyone. If however, you have no morals, have a twisted sense of humour, or just love the randomness of movies like Superbad, Pineapple Express, and other such movies combined, then you have to watch this movie.

P.S. I particularly enjoyed the surprise at the end. I'm obviously not going to spoil it, but it's definitely nostalgic.

Notes:
- Poster image obtained from www.impawards.com
- Based on the 2007 short film Jay and Seth vs. The Apocalypse, written by Evan Goldberg and Seth Rogen
- On April 1, 2013, Sony released a trailer for Pineapple Express 2 as a joke. In reality the trailer was for This Is The End.