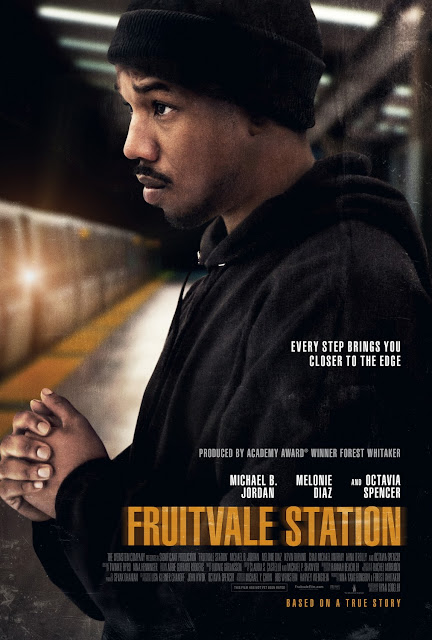 I may not have a loud voice but this is the voice I have and this is the way I know how to use it.
I love movies and the stories they tell and the emotions they evoke. I love movies almost as much as I love people. They are some of my favourite things in this world and they help connect us all.
Fruitvale Station has been on my to watch list for a long time. In Ryan Coogler's debut feature film, he had the daunting task of telling the story of the fatal shooting of Oscar Grant III and he absolutely nails it.
While there are some fictionalized aspects of Oscar's story the outstanding emotional tone of the film and the amazing performances gets the message across.
The movie starts with real footage of the shooting and while it may be hard to watch, it is important to do so and I think it was the right choice for Coogler to include it.
After seeing the brutal footage we know how the story ends and so we rewind a bit to follow 22-year old Oscar (Michael B. Jordan) on the last day of his life. He and his girlfriend Sophina (Melonie Diaz) have a young daughter, Tatiana. Their life isn't perfect, far from it. Oscar has had trouble with the law, having been in prison for New Year's the year before. He has no money and has lost his job.
He is a very flawed character but Jordan and Coogler keep you invested in him as a person and his character throughout the movie up to the climax. While not always making the right decisions, you are rooting for him to change.
For the last 30 minutes of the film I felt my heart beating faster. It was a combination of feeling anxiety, anger, and sadness at the intensity of the scenes leading up to his death.
Oscar's death sparked protests and riots and the officer who shot him was arrested. Ultimately the officer was sentenced to only 2 years in prison and served 11 months before being released on parole. While I am not the best source for these sorts of things, you can start here if you want to get to know the story a little better. There are plenty of great and more reliable sources on this tragic event and so many others. Just open your eyes and ears, learn, and do your part for change.
This movie was shot in 20 days and had a budget of less than $900,000 which gives it a real, gritty, yet endearing feel to it. During filming they used the same station and platform where Grant was shot. The music, or mostly the lack thereof, is one of the things I enjoyed most about the movie. There are some scenes that call for music but when the characters are speaking for the most part it is silent and that brings some realism to some of the more emotional exchanges.
Performance wise, I loved leads Jordan and Diaz but Octavia Spencer, who plays Oscar's mother Wanda, really draws you in and gets you hooked as soon as she appears on screen. She has had a lot of different roles in her career and while she plays comedic roles well, you really can't beat her dramatic prowess.
You can find Fruitvale Station to stream or rent on various services online (sadly not Netflix, at least not in Canada).