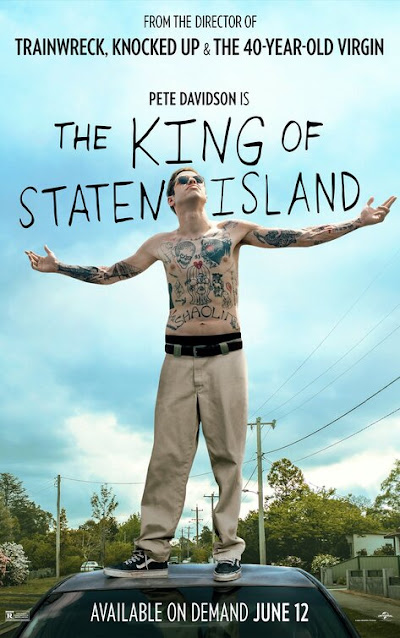 Pete Davidson is a polarizing person. He has been in the spotlight for a number of years and he is still only 26. He can certainly be offensive and crass but all in all he seems like a nice guy. Of course, I only have interviews I have seen with him and what I've read to base this off of.
The King of Staten Island is more or less based on Davidson's life. Semi-fictionalized, this Judd Apatow film is a combination of comedy and heart. It follows Scott, a 24-year old wannabe tattoo artist, living in his mother's basement. In a state of psychological arrested development (I definitely stole this from Wikipedia) since his father's death, he struggles with depression, drug use, and not being able to move on and get his shit together. Unlike Scott, his sister Claire (Maude Apatow) is a high achiever and is now off to college leaving Scott and their mother Margie (Marisa Tomei) to try and stick it out together.
Margie starts dating firefighter Ray (Bill Burr) and Scott freaks out. He can't come to terms with his mother dating for the first time in 17 years and it being with another firefighter. Eventually kicked out of the house he relies on some friends at the fire department to help him figure some things out.
Let's just get this out of the way, if you don't like Pete Davidson you are probably not going to like this movie. That being said, since the subject matter is so close to his heart he takes it seriously. Pete is ultimately playing a version of himself so it can only really be the most authentic performance.
While Pete may not be the most talented actor he performs well in his role as himself and the rest of the cast really tie the story together. I will always love Marisa Tomei and no one can convince me otherwise but I was definitely impressed with Maude Apatow and Bill Burr. I don't think I've seen Maude act since she was a kid and while it was a little off putting seeing her as an adult she does a great job in limited screen time.
Some other great characters are firehouse chief Papa (Steve Buscemi), Scott's on-again off-again dalliance Kelsey (Bel Powley), Ray's ex-wife Gina (Pamela Adlon), and a random cameo from rapper Action Bronson.
I enjoyed the realistic aspects of much of the story. I liked how his mental health journey was depicted. He is not suddenly all better by the end but he has taken the first steps and while positive still just the beginning. Also his journey as a tattoo artist could have ended with him becoming a great tattoo artist but by the end he still kind of sucks and it helps to ground the story.
Since this is a generally biographical story there are a number of ties to Pete's real life in the movie. He was born and raised in Staten Island and currently lives there in his mother's basement. While not specifically mentioned in the movie, Pete has struggled with depression and was diagnosed with Borderline Personality Disorder in 2017. Pete also shares Crohn's disease with his character and it comes up in a pretty hilarious way.
Pete's character in the movie was named after his father Scott Davidson. Like his character, Pete's father was a firefighter and died when Pete was 7. In the movie he was said to have died in a hotel fire which is technically true but more specifically Scott Davidson died at the Marriot World Trade Center in the September 11 attacks. The is a dedication to Scott at the end of the film.
The story is endearing and it is bolstered by good performances. I don't always relate with Pete's (or in this case Scott's) lifestyle but he is ultimately a good person that you want to root for. One big issue for me is its runtime. At 136 min it is about 30 minutes too long. There is a scene where Pete is tasked to feed and take care of a cat and it is emphasized quite a lot but no follow up is ever seen. It is a complete throwaway scene. There are a few of these that could have been cut to tighten up the flow of the story.
Other reviews seem to have it averaging around the 6-7/10 range. For me it's a little low but not far off. I would give it a 7, maybe a 7.5 dependent on mood.
It is available on video on demand now but I would probably just wait until it comes out on streaming services. Give it a couple of months and you can catch it then.
Random: