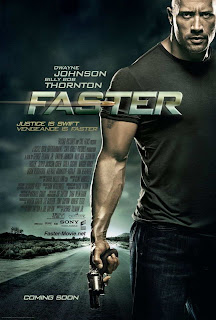 Faster is your basic action movie, no sense to add an original plot. The premise is the "Driver" (Dwayne Johnson) is released from prison after 10 years. The Driver's brother dragged him in on a bank robbery as....well the driver. So it goes off without a hitch but they get ambushed at there safe house and they are all gunned down or killed in some other fashion. Of course miraculously Dwayne Johnson's character gets shot in the back of the head yet survives with no noticeable brain damage, unless you count unrelenting rage and vengeance....but I won't. So his objective now that he's out is to hunt down those who double crossed him and who killed his brother.

As much as I did enjoy the movie it was a bit of a let down. The Driver's weapon of choice is one hell of a revolver but if you're going to get someone like Dwayne "The Rock" Johnson to kick some ass he doesn't need a weapon. I would have loved to see more physical beating from The Rock but it just didn't really happen.

Billy Bob Thornton comes in as a cop you really love to hate that has an interesting, yet totally predictable role in the movie. As much as she is a great actress, I'm not too fond of Carla Gugino in this film. She played a detective that seemed fairly dull when compared to the messed up shit Billy Bob Thornton was into. Carla has starred in some pretty big blockbusters such as The Watchmen, Night at the Museum, and in the Spy Kids franchise opposite Antonio Banderas. Another odd character is the aptly named "Killer" who is a egotistical hit man who strives to conquer life and all it has to offer. The Killer is played by Oliver Jackson-Cohen, a relative unknown but could be breaking into more mainstream roles after this film.

The main cast is accompanied by Maggie Grace, Xander Berkeley and a shockingly bad cameo by Jennifer Carpenter.

So how does this movie rate overall? Well the acting was pretty sub par, the plot was insignificant and the action was a bit of a let down. Fortunately for this movie I'm in a pretty lenient mood so I'll give it a....

It really doesn't deserve any more than that, not in my eyes anyway. Faster has been out on DVD for about a month but I'm sure you can find something better worth your money to rent. It wasn't awful but it would never be the first action movie I recommend to someone.

What Would Steve Do? - I wouldn't buy it or rent it but if it was on TV and nothing better was on I would probably watch it.

Random Facts
- Dwayne Johnson, as of February 2011, has actually returned to the WWE as a host and perhaps more. I'm not sure what effect this may have on his acting career but from watching a short clip of his return his comeback to the WWE probably won't be short lived.
- The director of Faster, George Tillman Jr., also directed Notorious, a film on the life and death of rapper Notorious B.I.G.
- Phil Joanou, the director of the hit comedy series 3rd Rock from the Sun was the original choice for director...which seems like an odd fit.
- This was Dwayne Johnson's first major action film since Doom in 2005. I haven't seen Doom but I would also think it would be pretty bad.
- Salma Hayek was the first choice for the character played by Carla Gugino but had to drop out shortly before the movie was set to shoot. Personally I don't she would have been right for the role but she would have given the character a little more sex appeal (Sorry Carla but seriously Salma is way hot)