This is my first review in a little while, I've been meaning to get around to it but I just haven't really been up for it. I actually watched this movie several weeks ago and the fact that I didn't write about it is one indication that it doesn't quite scream excellence. 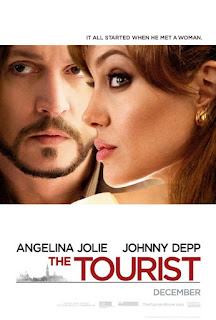 The Tourist revolves around an American tourist Frank Tupelo (Johnny Depp) who gets himself wrapped up in a strange series of events when he meets a strange woman of intrigue (Angelina Jolie). As much as I like Johnny Depp, I don't really like his character in this film. He is better suited in a very strange role, he should be the person of intrigue. That being said Angelina Jolie does a good job at filling out that role. Realistically these two should not really be cast opposite each other as a good movie needs opposites. These two actors are in many ways very similar in that they never are quite...normal. Paul Bettany played a supporting role as a government agent. Another actor I quite like yet I did not find his performance very moving. Of course with this type of film its hard to get a strong performance. Timothy Dalton and Rufus Sewell did fine in their small and seemingly insignificant roles for such powerful actors.

The plot is sadly very predictable. I am usually okay with a plot that lacks originality but it just doesn't cut it in this case. I found that their were places in the plot line where certain things just didn't make any sense. I'm sure if you watch it you'll see what I mean. The movie itself was well made, great actors, great shots, great city, but the story line just dragged them down like an anchor. Still I enjoyed it, but I would not have seen it in theaters. Honestly, I don't even recommend going out of your way to rent it. However, streaming and downloading is a bit more reasonable for most people.

I am probably going to get some kind of rating system in place but for now I'll just give this movie a......
6.5/10
I would give it a 6/10 but I do have to acknowledge the sex appeal of Angelina for guys (although I was never a fan of the lips) and Johnny Depp for the ladies (although he did gain a little weight and became oddly ordinary for the role).


Random Facts
I can't really think of any, I'll probably get some more for the next one.