Okay it took me way too long to see this movie but I'm certainly glad that I did. I watched it as part of my Oscar Best Picture category marathon. Sadly I only got through five of them. I am more of an upbeat comedic kind of movie goer so the more serious ones were left out. 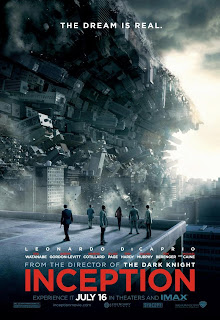 Inception (2010) is really a great film. The story is...well I'm not sure if it's original but I haven't seen anything quite like it. Sadly I did not see it in theaters so much of the effects were a bit lost on me. It didn't come out in 3-D but I'm not sure if that's a good thing or not. I believe that if the movie was displayed in 3-D the clean-up crew would be scraping exploded brains off the theater floor. A bit of an exaggeration I know but still you know it would be almost too much to handle.

For those who haven't seen it, Inception is a film about specialists who infiltrate a person's dreams in order to extract information. These specialists are called extractors. There are also Forgers, Architects and Chemists (I'm not sure if they say any more in the film, I'm just going off memory). Architects are the real masterminds as they are the ones designing the dreams. When you can control anything you want in a world that doesn't need to follow the laws of physics, that is some powerful shit. Dom Cobb (Leonardo Dicaprio) is an expert extractor and he partners with a straight shooting, very serious Arthur (Joseph Gordon-Levitt). For an insanely dangerous mission they accompany Ariadne (Ellen Page) a budding architect, Eames (Tom Hardy) an excellent Forger, Saito (Ken Watanabe) the money, Yusuf (Dileep Rao) the chemist, and Robert Fischer (Cillian Murphy) the mark. Marion Cotillard provides another great supporting performance as Mal and there is a great cameo by Michael Caine.

Now the plot and the actors aside, the visual effects were stunning. I had to watch it on a 15" laptop and it was still stunning. The film was the perfect level of confusing. It isn't confusing enough to make you want to stop watching and it's just confusing enough to make you want to know more. Plus, it's likely that you won't pick up on everything going on in the movie the first time around so you'll need to watch it again, which is where money off rentals comes in.

I'm not a big fan of Leo Dicaprio but he does a good job here. Joseph is awesome as Arthur but I do enjoy him more in lighter roles. The same goes for Ellen Page, there is often a little bite and comedy to her roles so this is a change of pace but still nice to see. As for the others, I haven't seen too much from them but I think it was a strong performance as a group.

Taking into account the originality of the story, the performances, and the visual effects, I give Inception a....
9.0/10
I can't really give it a 10 because then there won't be any room for improvement and that is no good, I am eager to see the many better films to come, and even great ones that I have yet to see.

Random Facts - you can probably find these on Wikipedia or IMDb but wouldn't you rather get it here?
- Inception was directed by Christopher Nolan who also directed the new Batman films.
- James Franco was considered for Arthur but was unavailable and the role went to Joseph Gordon-Levitt
- Evan Rachel Wood, Emily Blunt, Rachel McAdams and Emma Roberts were all choices for the role of Ariadne
- Cillian Murphy has a bag over his head for several scenes in Inception, Batman Begins and The Dark Knight, all directed by Christopher Nolan
- The character Maurice Fischer was named as an homage to abstract artist M.C. Escher (Maurits Cornelis Escher)
- The spinning hallway and zero gravity scenes were created with minimal computer graphics. It was mainly done with a fully spinning set and wire harnesses.
- The first names of the main characters (Dom, Robert, Eames, Ariadne/Arthur, Mal, Saito) spell DREAMS....like that was intentional....

I'll get to more tomorrow probably. I have actually seen quite a few other movies but as I said before just haven't gotten around to writing about it.