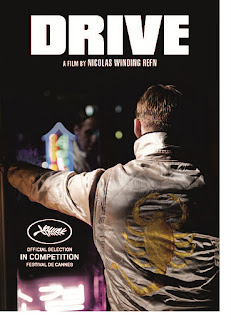 I definitely wanted to see this movie for a while now and would have even paid to see it. Fortunately for me there happened to be a screener that leaked, so that was the end of that.

Drive (2011) is about a part-time movie stunt driver in L.A. who moonlights as a getaway driver. He meets the girl next door and somehow his bad luck lands him right in the middle of some pretty nasty stuff. He does anything and everything to protect the people he cares about.

I mean that summary doesn't give anything away but the plot of this movie is really very simple. The story isn't what is that great about this movie, to me it's the film style, the characters and the decently realistic gory violence. This movie has a nice mix of just about everything, (except for comedy, unless you're extremely desensitized to violence like me). This film is a great example of the neo-noir genre. Now I don't know much about specific film styles, I just watch them but it thought it would be cool to bring it up. I like the what is said about the genre, "Characters were often conflicted antiheroes, trapped in a difficult situation and making choices out of desperation or nihilistic moral systems." This is clearly from Wikipedia because I'm too lazy to actually find a reputable source for anything. In any case that statement pretty much sums up the whole movie, as I'm sure it would other neo-noir films....if I knew any others. This movie has a soundtrack that has a definite 80's feel to it. At some points, if you closed your eyes you could almost swear it was a John Hughes film. Well not quite but it's close enough.

Now the movie itself can be a little jerky with the tempo. It starts off rather slow but picks up quite suddenly around halfway through. The line that really made me think the movie was turning to a different direction was when the Driver calmly uttered the words, "How about this - shut your mouth or I'll kick your teeth down your throat and I'll shut it for you".

The movie gets really violent in a hurry. It's definitely not as much action as you'd see in mainstream action movies but it looks a lot more realistic. You can't really compare the gore to a lot of action movies because Hollywood likes to glam things up with gunshot blow back and blood spray from gunshots. If you have a weak stomach or are sensitive to violence and gore this is probably not the movie for you. Just imagine someone getting stabbed in the eye with a fork in real life; if you don't think you can handle that I would suggest watching something less intense. With that in mind I loved the violence, it wasn't over done and it was pretty believable.

This movie reminds me of the movie Faster (2010) except that it was actually good. Ryan Gosling in this movie is so much more badass than Dwayne Johnson is in Faster. In both movies the main character is aptly named 'The Driver' but the title definitely goes to Gosling on this one.


The Cast
The Driver (Ryan Gosling) - Ryan does a great job as the calm, straight forward, and more or less psychopathic driver. The driver rarely loses his composure and seems to be very motivated to get things done and put things right. The one thing I didn't like was that he was so quiet and mumbled pretty often which made it hard to understand him. Gosling is the main draw to the movie for those who think he's hot.

Irene (Carey Mulligan) - It's nothing too special from Mulligan but she does a decent job becoming a rather drab kind-of-single-mother while still looking as cute and charming as ever.

Shannon (Bryan Cranston) - Shannon is the owner of a garage and fixes up cars for movie stunts. He's kind of lame and I wish Cranston had a cooler role but alas someone had to play the loser. He kind of reminds me of Golden Leg in Shaolin Soccer if anyone knows what I'm talking about.

Bernie (Albert Brooks) - A mobster that is the backer for Shannon's scheme to win it big on the NASCAR circuit with the Driver at the wheel. Able to play the good guy and the bad guy all at the same time he's the contrasts the Driver very nicely.

Nino (Ron Perlman) - Bernie's business partner but considerably less careful than his counterpart. I don't really like Ron Perlman unless he's playing Hellboy. He plays a jackass in this movie so I don't fell too bad about it. Nothing noteworthy but an improvement on his performance in Season of the Witch, which I'm not even going to link to because it's not worth your time.

Blanche (Christina Hendricks) - Now this is an interesting character. She is in on a heist with the Driver but turns out to double cross him. Hendricks is a pretty big name nowadays, doing a great job in Mad Men. Unfortunately for those interested in seeing this voluptuous red head in this movie, she actually has less than 10 minutes of screen time.

So rating this movie is a bit tricky for me because I am definitely attuned to violence and gore in film unlike most of you, or so I would hope. I really enjoyed this movie but I could see where people would be put off. Also, I'm not sure how well people will like it after a few years, it seems audiences jump on the bandwagon of something that's gotten a lot of hype or hear good things from a film festival. So I'll have to give Drive a....

I would have loved to give it a higher score but it might not have the same impact on other people as it did on me. I most likely would have rated it higher if I saw it in theaters, so that's a factor too.

What Would Steve Do?
I would go see it. Seriously, it's a great movie and I did not do it justice because I have no real technical knowledge of film. I'd like to go see it in theaters, it's something that one would appreciate a lot more on the big screen. Bottom line is just go see it, unless you've got a thing with unnecessary violence and gore.

Random Facts
- The character Irene was written as a Hispanic woman before Carey Mulligan was cast
- Hugh Jackman was originally supposed to be the Driver (which my opinion wouldn't have been as good, although it would probably make more money)
- You might recognize Albert Brooks' voice from The Simpsons most notably as Hank Scorpio or Russ Cargill from The Simpsons Movie
- Ron Perlman shattered his kneecap while filming a scene on a beach (which I find hilarious, does that make me a bad person?.....Nah.)
- More of a general inquiry for a lot of people, or at least those who know who Christina Hendricks is. Her breasts are in fact natural despite being rather disproportionate to her body.
- I made some of the text for the characters in pink to go with the credits for the movie, which I found a little odd as compared to the overall feel of the movie.