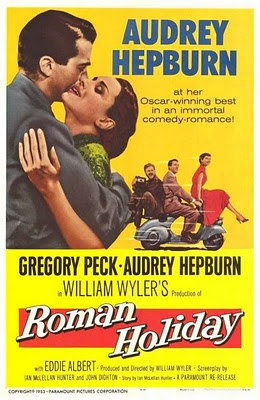 I'm going old school with this one. A classic movie that I always wanted to see but didn't get around to watching until last night.

Roman Holiday (1953), starring Audrey Hepburn and Gregory Peck, is a romantic comedy set in Italy's beautiful capital city. Ann (Hepburn) is a young princess who becomes fed up with her duties as a royal and decides to run away to spend some time about Rome. Her curiosity gets her into trouble and soon enough she finds herself in the company of a suave American news reporter Joe Bradley (Peck). Joe soon realizes this innocent young girl's identity and goes to all lengths to get an exclusive interview. This grand adventure leads them through Rome's great sites and closer to each others' hearts (Yeah it's cheesy, so what).

I wasn't quite sure what to expect when I decided to watch this film. Some movies aren't able to stand the test of time but this nearly sixty year old rom-com seems to do just that.

I first have to admit I am an Audrey Hepburn fan, despite only having seen her in Breakfast At Tiffany's, a fantastic movie by the way. In my opinion Audrey is the epitome of true beauty; I could go on for a while talking about Audrey but I'll spare you for most of it. Suffice it to say I'd be crushing hard on her if I was born roughly 70 years earlier. It wasn't just her outer beauty that does it for me but the way she always has a sense of purity, curiosity and genuine care for others. Roman Holiday was actually Miss Hepburn's break out role in Hollywood leading to a career that would cement her legacy in film.

Paired with Hepburn in this one is Gregory Peck. I'm sure many of you remember watching the movie version of To Kill A Mockingbird in school, well Peck played the epic role of Atticus Finch. Peck has a great presence and command in his on-screen time and has great chemistry with Hepburn. Another great thing about Peck is his great voice. He has a voice that, for some reason reminds me of Patrick Stewart, not that they sound particularly similar. They both just have this voice that is calm and smooth yet commanding and authoritative.

Since this movie was made in an entirely different era of Hollywood entertainment, the only other person worth mentioning is Eddie Albert who was cast as Joe Bradley's close friend Irving Radovich. Although very few of us (that includes me) would know of any of his work, his performance in this movie is actually quite funny. He supplies or is involved in a lot of the comedy in this film and provides a nice contrast to Peck's straight-man type persona.

Now finally onto the part where I talk about the film itself. The film was certainly cliche but in all the right ways. Also the fact that this movie was made in 1953, rom-com cliches were not quite so done to death as they are today so I'll let them slip for this one. Roman Holiday didn't heavily rely on too many cultural references at the time so most of the movie isn't lost to today's viewers. The film included many beautiful locations around Rome, which were only slightly stunted by the fact that it was in black and white. It is a solid film throughout and at a couple minutes shy of two hours long, it is longer than I had original thought. That being said it doesn't feel like a two hour movie. The only thing that annoyed me about the movie was that the character Joe Bradley was kind of a dick for most of the movie but was smooth enough to hide it.

I really enjoyed watching this movie and it definitely still stands up to today's entertainment, although much more wholesome (Let's face it, entertainment these days is pretty smutty). I give Roman Holiday ....

I can't really justify giving a romantic comedy any higher than that, no matter how much I wish my life was like one.

What Would Steve Do?
I'm not sure if there are any Blockbusters still in business but I'm sure you can find this movie somewhere. I would strongly recommend it to everyone. Someday I'll probably even buy it, and for all of those who know how cheap I am, that is saying quite a bit. If you can't buy it or rent it, just download it, it's definitely worth a watch.

Steve's Random Facts
- Both Gregory Peck and Audrey Hepburn are ranked amongst the American Film Institute's 50 greatest screen legends of American cinema (Gregory Peck: #12 Male Legend, Audrey Hepburn: #3 Female Legend)
- One of the only two women to outrank Audrey on AFI's list is the other Miss Hepburn, Katharine Hepburn at #1
- Roman Holiday was nominated for 10 Academy Awards, winning three, including Audrey Hepburn's Best Actress
- Director William Wyler also directed Mrs. Miniver (1942), The Best Years of Our Lives (1946), and Ben-Hur (1959), for all of which he won an Oscar for Best Director.
- Although I've never known who Eddie Albert was (a little past my time), he did voice The Vulture in Spider-Man: The Animated Series in the 90's
- The story was originally option by Frank Capra and he had originally wanted to cast Cary Grant and Elizabeth Taylor
- The movie was shot in black and white so that the astonishing Roman scenery would not overpower the characters
- I'm not sure if you noticed but I used the present tense when talking about a lot of the people involved, just to avoid the sad reality that they are pretty much all dead now.
- There is one last thing that I hope you guys watch even if you don't watch the movie. It is an outtake from Audrey Hepburn's screen test for Roman Holiday. This footage was taken after the director had said "cut" but the cameraman was still rolling. It may not really seem that exciting but this was back in the early 50's and Audrey was only like 23 when filmed this movie. Audrey's screen test.