So I watched this movie during the summer but haven't gotten around to talking about it until now. 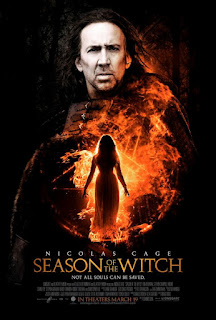 So to give you a quick summary Season of the Witch is set in the 14th century where two knights (Nicolas Cage & Ron Perlman) take part in a fictional crusade. They find out that the Holy Roman Empire is overtaken by the plague and are tasked in helping to end it. This task is to escort the alleged witch accused of causing the plague to a monastery where they can nullify her powers (if she has any).

So the concept of the movie seems pretty solid; a lot of the individual parts have been done to death but as a whole it's decently unique (at least to my knowledge). Sadly, the film didn't really pan out so well. The acting is terrible and the ending just makes you want to throw something at the television. Unfortunately, that wouldn't help it would just add to the insult to your soul that is this movie. Granted it is entertaining and humorous at times but laughter can only go so far.

I'm a fan of Nicolas Cage, I know a lot of people don't like him but he gets the job done most of the time. Cage got by in this one with what seemed like minimal effort. It's like the bird courses you take in school in order to boost your mark but only to get like a 60 because you don't care enough to actually go to class. You all know what I'm talking about. At least Cage tries to fake an accent unlike his inept co-star Perlman.

I didn't really know who Ron Perlman was until he was in Hellboy since he does mostly voice acting. He should stick with his day job because his performance in this movie was....actually it was exactly the same as his acting in Hellboy, which is the problem. You cannot use the same accent you used in Hellboy in a role as a knight crusading for Jerusalem. I'm not sure if it was on purpose in this movie but if it was it didn't really work for comic relief, it was just more issues to get hung up while watching it.

The action wasn't terrible but there really wasn't enough of it to enjoy as much as other crusade type movies like Kingdom of Heaven, which was decent despite starring Orlando Bloom.

At this point I would talk about the supporting cast and what they did to enhance or detract from the movie going experience but I don't really want to. They didn't do enough to catch my eye but weren't so awful as to outshine the turd of a duo that is Cage and Perlman.

So I will bestow upon this movie a rating of....

I was going to give it a 5.0 and perhaps I'm being unfair to this movie but it's a Monday so too bad.

What Would Steve Do?
I would never buy this movie, nor would I ever rent it. Seriously, don't even bother wasting bandwidth on streaming it. Just pick another movie. Almost any other movie would do. If you're set on another Nicolas Cage movie, go watch my personal favourites of his, Face/Off or The Rock.

Steve's Random Facts
There aren't any today. The only thing I can tell you is go watch better movies, but not Something Borrowed but I'll get to that later, maybe tonight.