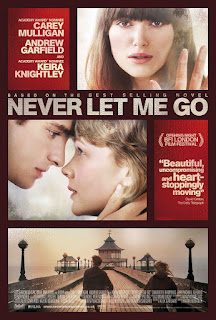 Just to let you know right off the bat, Never Let Me Go (2010) is a rather depressing film, but nonetheless I thoroughly enjoyed it. It has a story that is sad, creepy, mostly predictable, yet profound and emotional. It is based on the 2005 Kazuo Ishiguro novel of the same name.

This dystopian story is narrated by a young woman named Kathy H played by Carey Mulligan. She tells the story of her childhood with her friends Ruth (Keira Knightley) and Tommy D (Andrew Garfield). All three attended a boarding school called Hailsham. At Hailsham, things seem a little bit different as they put extra emphasis creativity and art and on keeping their bodies healthy. We soon discover that the children who attend such schools (as there are others) only have one purpose in life, to donate their vital organs and eventually die or "complete". Through all of this Kathy, Tommy and Ruth have a complicated and sometimes volatile relationship

It definitely reminds me of Orwell's Nineteen Eighty-Four due to the dystopian and rather depressing nature of the plot. It kind of gives you more appreciation that the world isn't really like this. The plot is quite predictable once the premise and the characters are introduced but it doesn't really take away from the movie.

As for the acting, I genuinely think the three stars did a masterful job filling out each character's little qualities. I haven't as of yet read the novel, so I can't really say what was done differently, but I am actually looking forward to reading it. A lot of people bash Keira Knightley on her inability to act, which is apparent in certain cases, but she impressed me with her portrayal of the manipulative Ruth. I haven't seen The Social Network (mainly because I simply don't really care) but I have seen Andrew Garfield act before in Boy A (2007) which I also recommend watching. On that note I think he'll do a great job as Peter Parker in The Amazing Spiderman tentatively scheduled to release on July 3, 2012. At least he'll do a better job than Tobey Maguire. I am definitely biased but I love Carey Mulligan in the role of Kathy. Kathy is quiet and reserved but throughout the different phases of her life she learns to become strong, more independent and the most confident of the three, a reversal from the beginning of the story. There is a rather abrupt change in all three characters between the second and third acts of the film which is fun to watch even if it is obvious why.

The British definitely have a knack for creating depressing stories, which reminds me of another Keira Knightley movie that is unbelievably depressing, Atonement (2007).

Never Let Me Go is simply a great film that involves the evolution of relationships between friends and showcases great young British talent.