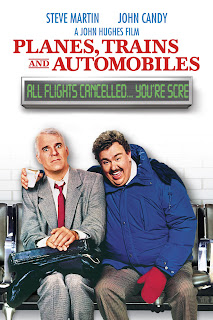 A man must struggle to travel home for Thanksgiving, with an obnoxious slob of a shower ring salesman his only companion.

Steve Martin and John Candy are a fantastic duo. Although Steve can have his crazy moments in film he leaves most of that up to John in this case. John Candy basically embodies everything you hate about travelling into one extremely obnoxious person. He means well but good but intentions only go so far. I'll try not to spoil the ending for those who have missed out all these years but I'm sure you'll get to love John's character by the end.

Neal Page (Steve Martin) is just trying to get back home to Chicago for Thanksgiving after a business trip to New York but runs into all kinds of trouble. This is mostly caused by the bumbling shower ring salesman Del Griffith (John Candy). Although it is nearly impossible for them to co-exist, the journey allows them to develop a respect and care for each other.

This movie has a great balance of serious moments and laugh out loud moments. John Hughes was the master of this balance in film. You can watch just about any of his movies and be brought to tears from him either pulling at your heart strings or just from laughing so hard you seem to have wound up on the floor.

I would recommend watching this at anytime, it isn't a film you have to be in a particular mood to watch it's simply wonderful.

Also, Kevin Bacon has a great cameo in a scene racing for a taxi opposite Steve.

There is one song at the very end of the movie that suits the scene so well and literally brings me to tears every time I hear it. For those who know this movie, you'll know what I mean. 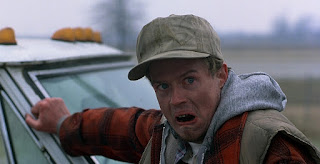 VS.
Dylan Baker in Spiderman 2 as Dr. Curt Connors 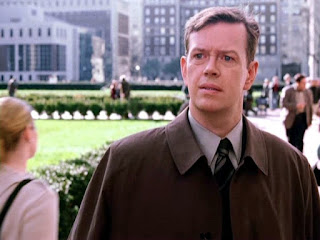 I know it was 15 years between roles but still I just thought it to be a hilarious difference in my opinion but that's what actors are paid for.