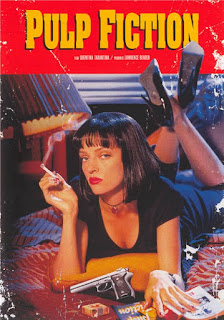 It's sad to admit it but I didn't watch Pulp Fiction (1994) until late last year (meaning 2011). It's a cult classic and brings out a lot of things that I enjoy in film like offensive language and violence, but I simply never got around to it.

This is one of Tarantino's best and stars John Travolta, Samuel L. Jackson, Uma Thurman, Bruce Willis, Ving Rhames, Harvey Keitel and of course Quentin Tarantino himself. Plus there are small parts and cameos from Eric Stoltz, Steve Buscemi, Tim Roth, Amanda Plummer, Phil Lamarr, Julia Sweeney, and the great Christopher Walken. This is a fantastic cast not only because they are all such great actors and actresses but because each has a specific role to play and no one role really overpowers another and all work together to tell the story. Unlike some ensemble movies, notably Garry Marshall's last two directorial efforts, this one actually works well.

The film is split into three main stories that transition pretty nicely between one another.

I would tell you more about each individual story but I'd rather you watch it for yourselves.

Although I do love this movie, if you can't stand extremely offensive language and an abundance of violence, gore, and rather intense situations, then I do not recommend watching it. For those who can handle it, you're in for a real treat.

-
Another great movie, although not really related, is Drive (2011). It has a certain similarity to it, a kind of dark quality.