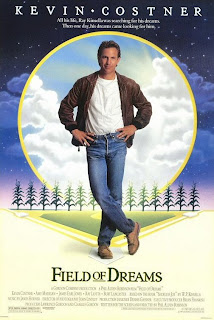 When a mysterious voice tells you to build a full sized baseball field with stands and lights over the crops that are your livelihood, you just do it. Field of Dreams (1989) is a pretty crazy story but a good one. I'm not a huge fan of baseball movies but this one is pretty good despite having no real baseball action.

One night, Ray Kinsella (Kevin Costner), a corn farmer from Iowa, hears a voice that tells him to build a baseball diamond over his crops. Obviously his wife Annie (Amy Madigan) is skeptical but allows him to mow down their livelihood to build an expensive and ridiculous baseball field. Although sinking into financial ruin, with the help of his young daughter Karin (Gaby Hoffman), he finds himself able to see and play with Shoeless Joe Jackson (Ray Liotta) and seven other players banned in the Black Sox Scandal of 1919. The mysterious voice returns and drives him to seek out a reclusive author (James Earl Jones) and former ball player that turned physician (Burt Lancaster) that died 16 years earlier. Not making any sense? Good.

Not Costner's finest work but it sure beats Waterworld (1995).

This movie takes a few notable truths from real life. The Black Sox Scandal was a real thing and is a black mark in the history of baseball. Shoeless Joe's involvement in the scandal has been debated, I honestly think he was innocent but I don't really follow baseball. In any case he, along with seven other members of the 1919 Chicago White Sox were banned from the league for life. Also, the reclusive author as played by James Earl Jones is based upon J.D. Salinger, another recluse most notable for writing The Catcher in the Rye.

It may be a rather odd movie but it's a feel good story with a happy ending so why not check it out if you haven't seen it.

Notes:
- Adapted from the novel Shoeless Joe by W.P. Kinsella.
- Ray's last name is Kinsella, just like the author. Coincidence? No...no it's not.