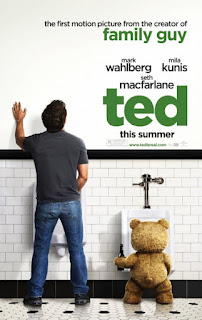 So I've been busy....and lazy so I haven't posted something in a couple weeks and also put my AFI project on hold but I'll get that done eventually. In any case, I finally got around to seeing a movie that I feel like I can write about.

I've been a big fan of Seth MacFarlane creator of Family Guy because I always think of him as Matt Groening 2.0. For those who don't know, Matt Groening created The Simpsons and Futurama, and for those people that didn't know.....shame on you. Family Guy is just a smattering of random jokes and offensive material with no real coherent flow or plot. Such a show is not for everyone, but I love it. I again attribute it to being horribly desensitized via 90s television and film.

Anyway, after 10 seasons of Family Guy over 13 years, MacFarlane has finally deemed us worthy of a feature-length film. With Ted (2012) he did a great job in his first outing into live action film. It has all the obscene material and offensive language Family Guy has to offer but does it in a different setting and with real people. Also, the premise of the story is mostly original. The inanimate object that comes to life as a friend isn't totally original but Ted shows us what happens after they grow up which is exactly what you would expect of such a comedy. A foul-mouthed, offensive, teddy bear dealing with real world adult problems is as hilarious as you would think. This movie makes me think of what would have happened if Pinocchio grew up and became a pot-smoking dead beat. That would be a sight to behold but I doubt Disney would like that.

I very much enjoy the cast involved in this film because many of them are directly involved with or are frequent contributors to Seth MacFarlane related projects.

There are also a couple cameos of Ryan Reynolds as Jared, Alex Borstein (plays Lois on Family Guy) as John's Mom, Sam Jones (aka Flash Gordon), and Tom Skerritt.

Some people don't like Mark Wahlberg as an actor but I enjoy his performances. I very much appreciate that he is trying to step out of the stereotype of serious roles and get some comedy experience under his belt. He's already been in a couple comedies, like his roles in The Other Guys (2010) and Date Night (2010). If you've ever seen an interview of Wahlberg he's actually a pretty funny guy, but that's just homework for another time.

I've been pretty vague but you don't need any back story before watching this movie so just go out and do it. If you're offended by the frequent racism and for that matter the sheer volume of generally offensive material present in Family Guy or the like, than it may not be for you. For those people with a sense of humour I highly recommend watching it. It has plenty of laugh out loud moments, it's nothing too memorable but it's stupid humour that will keep you  happy and entertained for the 106 minutes it plays for.

Notes:
- Seth MacFarlane also created American Dad! and The Cleveland Show, but I don't really care for either which is why they are only a footnote.
- After John does an impression of Ted, Ted says "Oh, come on, I don't sound that much like Peter Griffin!". A nice, not so subtle allusion the film's link to Family Guy.
- Movie poster from www.impawards.com, check it out.