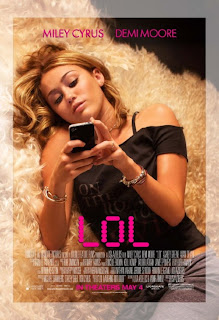 Teenage girl gets heart-broken and falls in love with best friend, what a new and innovative idea for a film. In the case that you didn't catch the sarcasm, please cease reading this and smack your palm against your forehead because I'm too busy right now to do it for you.

LOL (2012) has a slight tweak in the plot as it also focuses on the mother-daughter relationship between Lola (Miley Cyrus) and her mother Anne (Demi Moore). Unfortunately that's as much as this film wants to stretch. About 10 minutes in I was less interested in the actually plot or character development and was just focusing on counting how many bad cliches were used throughout the film. Suffice it to say I lost count.

The cast is a little bit of a mish-mashed ensemble of random actors and actresses and although those types of mashes have paid off in the past, this is not one of those times. The only two actors I enjoyed in the film were Adam Sevani (Moose from the Step Up 2 and so on) and Jean-Luc Bilodeau (played Josh Trager in Kyle XY, an ABC Family Series I used to watch). Both of which had very little screen time and I think that's a good thing for both of their careers.

There are a select chunk of people that think  Miley Cyrus is attractive, and that's mainly because they only see massively airbrushed stills of her. She has a butterface plain and simple. I don't want to come off like I'm hating on her too much. She may not be super attractive like some other young stars but she does well with her target audience and seems to have found her niche in the entertainment industry. I just don't fall into any of those categories and I think she's a little over-hyped. I don't often mind singers crossing over into acting but please Miley just stick to what you're moderately good at and are excessively overpaid for.

I doubt there will be many die hard Miley fans reading this but I would like to apologize to them for a little bit of a hateful rant.

To be perfectly honest, I didn't finish the movie. I got like 40 minutes in and just stopped caring. I'm pretty lenient with movies but you shouldn't have to be. It's probably not nearly as bad as I think it is but then again maybe it's worse. I probably will never know because I don't care to waste my bandwidth on it. If you're a pre-teen girl who idolizes Miley go ahead and rot your brain with this trash, otherwise avoid it like the videotape in The Ring.

Notes:
- Nothing really important to note here, just wanted to say that Demi Moore would have better looking kids than the ones she has in the movie.
- IMDb is pretty notorious for being more lenient in ratings than say Rotten Tomatoes. It's current IMDb rating is 2.6.....which is pretty anemic for any decently budgeted film with actually Hollywood stars.