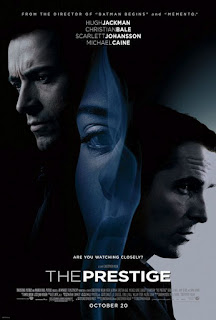 We're starting off in familiar territory, probably to ease people into foreign film slowly, just in case they are stuck in Hollywood's torrent of mass-produced mainstream-style films (like me, sadly).

The directorial genius of Christopher Nolan strikes again. Before The Prestige (2006) Nolan's major contributions only really included Memento (2000) and Batman Begins (2005); two absolutely fantastic movies. Since then he has the two exceptional follow-ups in the Batman series under his belt; The Dark Knight (2008) and The Dark Knight Rises (2012), along with the ever popular and puzzling Inception (2010).

Now onto the main event. The Prestige (2006) follows the rivalry between two London-based magicians at the turn of the 19th century; Robert Angier (Hugh Jackman) and Alfred Borden (Christian Bale). The two performers try to better the mystifying illusions of the other at any cost. Since it is billed as a mystery film I shall leave some of the mystery for you to see but to be expected there are plenty of twists and turns that you may or may not anticipate.

Christian Bale and Hugh Jackman are two actors that I greatly admire. They are fantastic actors and have portrayed some very iconic roles that always get me excited when watching. Also, the fact that David Bowie is in this film and he portrays one of the greatest physicists and inventors of all-time, Nikola Tesla, is a cherry  on the proverbial sundae that is this film. Scarlett Johansson's performance was sadly forgettable in her role as Olivia but it's alright because she's not really a pivotable part of the film. Also, her English accent was rather bad, but maybe I'm just saying that because I know she isn't British. Michael Caine is great as usual as  Cutter, a stage engineer responsible for creating mechanisms and props to complete the magicians' illusions.

We also see the familiar faces of Andy Serkis (aka Gollum, among other roles) and Piper Perabo (I only remember her as the girl from Coyote Ugly)

Now there is one plot revelation that seems rather out of place, and you will notice it as it comes (again not trying to ruin anything if you haven't seen it). It has a certain fantasy/science-fiction quality to it, and as mystifying as it is, to me it is the only thing about this movie I don't like.

I could talk endlessly about the subplots and background of the characters and the subtle meanings behind a lot of what they say but that's for each viewer to figure out. This is a great film and has some dalliances with actual historic events but ultimately it is a work of fiction. I would definitely recommend you watch it for some great performances and a fantastic story. There are a few flaws here and there and some of it is rather predictable but I thoroughly enjoyed it in the end.

Notes:
- From the World Cinema point of view this fulfills the British (UK) section of the cinematic industry.
- This is one of 4 films on which Michael Caine and Christian Bale have worked together. Can you guess the other three? I'll give you a hint, they are all in the same series. I also referenced them in the second little blurb.
- When Jackman is wearing his false beard in the film, it reminded me of the trailer for Les Misérables coming this December and it should be fantastic.
- Based on the 1995 novel of the same name written by British author Christopher Priest.
- Poster Image obtained from www.impawards.com