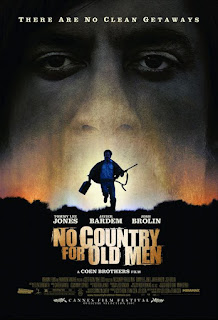 I am very late with this one but here is the second film we watched in our World Cinema and Visual Culture class. We went very far to find this film in the mysterious land they call the United States. Yes, the first two films so far haven't strayed very far from the comfort zone of the class but soon we'll be venturing into a more expansive pool of films that may better describe world cinema.

So this week's (or I guess last week, since I'm so late with this) film was No Country for Old Men (2007). The plot was driven by Llewelyn Moss (Josh Brolin) a hunter who stumbles upon a drug deal gone awry. He takes the $2-million that was left at the scene but soon finds himself being pursued by psychopathic hitman Anton Chigurh (Javier Bardem) who has been hired to retrieve the money. Sheriff Ed Tom Bell (Tommy Lee Jones) has his own story that seems to be on the outside looking in at the plot unfolding between the two men facing off for the drug money.

Written by the Coen brothers Ethan and Joel, you expected it to have a very different feel than most ditsy films that don't have much substance. The Coens have written some great screenplays like Fargo (1996), The Big Lebowski (1998), Burn After Reading (2008), A Serious Man (2009), and True Grit (2010), just to name a few.

Javier Bardem really deserved the Oscar he won for Best Supporting Actor for his role in this one. He made Chigurh as alien and estranged to the setting and other characters as possible and it really stuck out. Brolin and Jones put in admirable performances but it wasn't anything too noteworthy. I found Woody Harrelson's character Carson Wells to be rather pointless and just something that was put in to take up like 20 minutes of film time. Wells did help drive the plot a little but things that he did bring to the film probably could have been put in by other characters rather seamlessly. That being said it's always nice to see Harrelson in film no matter the role.

I very much enjoyed this film. It was simplistic in many ways because it doesn't really have any music, and any that it does have is in very few scenes. It boasts beautiful shots of the desert expanse of Southern Texas, but that's not really what you come to see specifically when choosing a movie, so I'll skip right over that. It can be a little bit slow at times but I think the overall pacing was fine and did well with the tone of the film, which is dreadfully serious. Ultimately a much watch, but those that don't enjoy violence may want to go in a different direction.
Notes:
- The film won 4 Oscars, including 2 for the Coen brothers for both Writing and Directing, and Best Picture.
- Josh Brolin would later play the younger version of Tommy Lee Jones' character Agent K in Men in Black III (2012).
- As is the case with many films in our modern age of cinema, it has its base in literature. No Country for Old Men was based on a novel of the same name written by American author Cormac McCarthy.
- Poster Image obtained from www.impawards.com