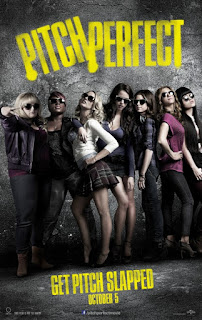 I've been very much slacking on the blog writing front. I've definitely been watching enough but have been neglecting chattering on about films that most people have seen. Now this movie is actually still in theaters. Yes, I know you're shocked that I spent money on watching a new movie in theaters. It was a good movie going experience with a few friends (you know who you are), and now I will share it with you.

If you're anything like me, you like great music in great films. Well this movie at least has the first part down. Don't worry it's not a bad movie but it probably won't be up for any Oscars. It's basically Glee but slightly less cheesy, slightly more cliche (actually probably the same amount of cliche), and it a more compact two-hour format. I did like Glee....for a while, but it got kind of old. Pitch Perfect is a great film to bring together the casual movie goers and those die-hard musical lovers.

Beca (Anna Kendrick) is a freshman at Barden College, where she has enrolled only because her father is a professor there. What she really wants in life is to be a DJ and produce music in L.A.. She makes a deal with her father to join one club for the year and in turn he will pay for her to move out there. Beca ends up joining The Bellas, an all-female acapella group headed by the only two remaining members from the year before, Chloe (Brittany Snow) and the over-controlling Aubrey (Anna Camp). Also figuring into Beca's life is boyishly charming Treble Maker, Jesse (Skylar Astin).

There are some great songs featured in this film, I'm not going to spoil too much but I will say that there is a decent variety between old, new, pop, hip-hop, and whatnot. Also, the fact that there are acapella versions of The Final Countdown and Don't You Forget About Me is so awesome and definitely made my night.

There were decent to good acting performances from the main characters but I think the supporting characters stole the show, Rebel Wilson (who plays Fat Amy) especially. She is finally getting some much deserved screen time in her more recent films and it's great to see. There were also entertaining bit parts from Elizabeth Banks, John Michael Higgins, and Christopher Mintz-Plasse. There are a lot of other great performers in this film but the list would be ridiculous, besides you've already read enough don't you think?

Anyway, looking past the tired plot and the horrible acapella related puns (No, I will not give examples), this is a solid musical comedy with some great choices for music and a well rounded cast of young up and comers. Go with your friends to see this one, you'll enjoy it, unless you hate music and have no soul. I'd suggest going to the theater the next cheap day for students. For those around here (and if you don't know where 'here' is referring to, you probably don't know) the cheap day is Tuesday, tomorrow. So.....yeah....get on that.

Notes:
- Pitch Perfect at Rotten Tomatoes (just because I have IMDb as the default)
- Jesse has a great love and appreciation for film (more particular to film scores and soundtracks) so I find relating to him rather easy.
- Adam DeVine who plays Bumper kind of sounds like Jason Bateman, just saying. More of the cadence of speech rather than the sound itself.
- Poster image obtained from www.impawards.com