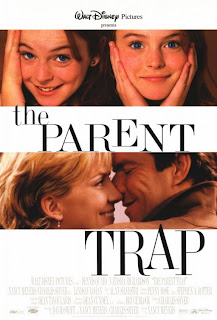 Remember when Lindsay Lohan used to be innocent? Yeah it does seem so long ago doesn't it. I think Mean Girls (2004) was just on the cusp between her being a normal actress and a complete train wreck. Sorry Lindsey but you know it's true; you really need to get your act together.

Watching The Parent Trap (1998) always makes me think of the potential Lohan had at a young age. She was witty and clever and as much as that came from the writers, she gave it some flair.

Quick summary this time because I'm feeling lazy. Lohan places twins Hallie and Annie in the film. One lives in California, one lives in London, each with one parent. They don't know they're twins, but meet at camp and become best friends. They switch places to meet the other parent and scheme to bring their parents back together.

A remake of the 1961 film of the same name, this updated Disney version will always be a favourite for me. On the face of it, it isn't the strongest of movies but has a simple enough plot to follow, clever camera work and some funny and dramatic moments that keep you entertained. Watch it for a blast from the past and a nice look at the most wholesome Lohan's career will ever be.

Notes:
- There are a couple of real life references to places like the RMS Queen Elizabeth 2 ocean liner and Camp Walden for girls. I'm pretty sure they are referring to that particular Camp Walden, seems about right through vague geographical references in the film.
- Sadly Natasha Richardson, the actress who played Annie and Halley's mother, died in 2009. She sustained a seemingly normal head injury while skiing at Mont Tremblant, Quebec. She later died due to an epidural hematoma. She was also Liam Neeson's wife.
- Maggie Wheeler who played Janice on Friends has a small role as Marva Kulp, Jr.
- Michael Lohan, Lindsay's younger brother, plays the only boy at the girls camp.
- Poster image obtained from www.impawards.com