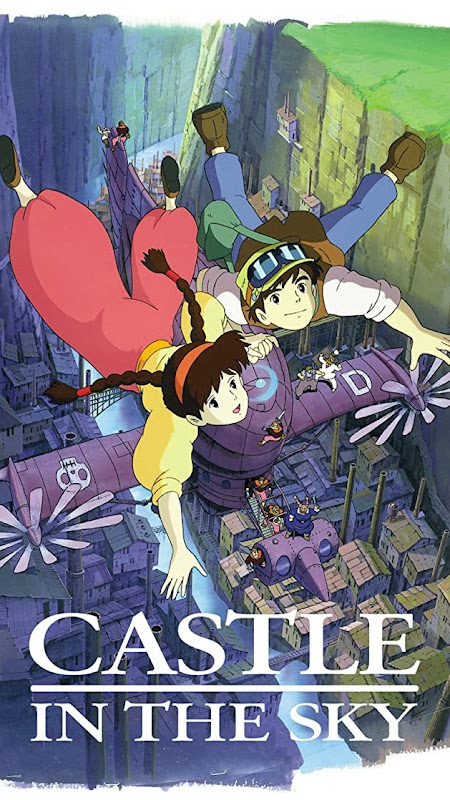 Here we are at the first official Studio Ghibli film Castle in the Sky released in 1986.
Castle in the Sky follows Sheeta, a young orphan girl, who has been captured by the military and government agent Colonel Muska. When her airship is attacked by Captain Dola and her pirate gang, she falls from the sky but is slowed by her magical pendant. She descends to earth in a small mining town where she is saved by young orphan boy Pazu (what's with all the orphans?). Pazu and Sheeta are chased by both pirates and the government and are caught up in the search for the lost floating city of Laputa.
While the original film came out in 1986, Disney produced the English voice dub in 1998 and it didn't release until 2003.
The main characters Pazu and Sheeta may not have the strongest voice acting but thankfully the supporting cast does a wonderful job of stealing the show. As a character I like Sheeta because we see her grow from being mostly a damsel in distress to being able to stand up for herself and take action. Pazu works well with Sheeta because he is a hard working boy who is capable but also pretty comical and I think that's important.
Mark Hamill, despite playing one of the most iconic heroes of all-time, works oh so well when lending his voice to villains. As Colonel Muska he can flip the switch from soft spoken and charming to creepy and mischievous and it's perfect. I can hear his Joker anytime he voices a villain and that's not a bad thing.
Captain Dola is voiced by Cloris Leachman and is probably my favourite character of the movie or at least the most interesting. A busty woman with Pippy Longstocking pig tails, she is the Captain of the pirate gang comprised of her three sons and her husband. Although not a lot of her story is known I would enjoy a spin off of her own to see what sort of life she's led. I also love that her sons are voiced by Mandy Patinkin, Andy Dick, and Michael McShane.
Some other minor roles are filled out by veterans of voice acting Debi Derryberry, Tress MacNeille, and Jim Cummings.
James Van Der Beek and Anna Paquin sadly may be the weakest part of the film. I'm not saying they are bad per se but when compared to the vocal nuances of Mark Hamill, the bar is set pretty high. Van Der Beek does an adequate job as Pazu but what is more interesting to me is Anna Paquin's accent. I like Paquin as an actress but here she slips in and out of her Kiwi accent so randomly it's kind of distracting. I am not sure if that's what they were going for but it's kind of all over the place.
Castle in the Sky, a little more so than Nausicaä, has an elevated level of whimsy and humour. Not that Nausicaä didn't have it's fun but it generally takes things more seriously. Nausicaä's music was often quite eerie due to the prevalence of giant insects and a toxic jungle whereas Castle in the Sky on the other hand is allowed to be more triumphant and majestic in it's score due to the inclusion of a giant......castle in the sky. Visually it is a light and bright movie (especially compared to Nausicaä) as much of it is set in the sky with grand airships and sky castles.
I really didn't give this film enough credit when I first watched it. It has been a couple years since I viewed it last but I think it ages well. It is set far enough back (the late 19th/early 20th century) that it is a fantastical period piece set in an alternate reality where flying castles and robots exist.
Castle in the Sky has an aforementioned majesty to it that sets the foundation for all the future Ghibli films. My only real gripe is that it's possibly too long. At just over two hours, not all that much actually happens and most that does is more adjacent to the story than pushing it forward. Still it is a staple for the Ghibli catalogue and while I don't put it above Nausicaä, it certainly is still super enjoyable.
Notes: