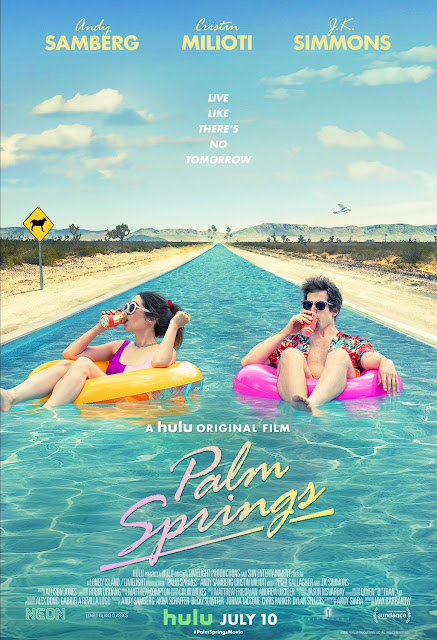 I was a little worried that Palm Springs was going to turn out too much like a Lonely Island sketch. Don't get me wrong, I enjoy the Lonely Island but typically in short clips and small doses. Their humour lends itself to being bite sized. Thankfully it hits just the right amount, mixed in with a good proportion of sincerity.
Palm Springs starts with Nyles (Andy Samberg) waking up and having sex (rather unsuccessfully) with his girlfriend Misty. They are in Palm Springs for the wedding of Misty's friend Tala (Camila Mendes). The maid of honour, Sarah (Cristin Milioti), Tala's older sister, is saved from having to make a drunken speech when Nyles swoops in to save the day. He is strangely on point with everything he says and does the whole night and this intrigues Sarah. They head off to the desert but are rudely interrupted when Nyles gets shot with an arrow from Roy (J.K. Simmons). Sarah then follows Nyles into a strange cave only to realize that she is now trapped in the same time loop with him repeating the same day over and over with no escape.
I realize the Roy part of the summary I wrote above is confusing and makes no sense. That's the point, I didn't want to give away too much and it's honestly just as confusing when you watch it.
In terms of premise, it is essentially Groundhog Day but you're stuck in the loop with someone else. We follow Sarah and Nyles through a lot of wacky shenanigans with no consequences but the ultimate question is, as it was with Groundhog Day, how long has Nyles been stuck reliving this same day? In Groundhog Day, it has been theorized that Phil Connors has been trapped for upwards of 30 years. In this case, I don't think Nyles has been trapped nearly as long but definitely at least several years.
A debut feature film for both director Max Barbakow and writer Andy Siara, they kind of knock it out of the park. They did have some help though. Produced in part by the Lonely Island crew Akiva Schaffer, Jorma Taccone, and Samberg, you can definitely see where their style of humour comes across but it's not overbearing.
Samberg and Milioti work really well together. She keeps him a little more grounded (a little less Andy Samberg) and he brings out a more whimsical side of her that is not typically apparent in her usual roles. I also want to note that Milioti is really good at freaking out on camera, I have noticed this over the few roles I have seen her in.
Perhaps what I love most is J.K. Simmons as Roy. He has a great albeit brief character arc and it is book-ended with a satisfying conclusion. Camila Mendes and Tyler Hoechlin are pretty much there just for their looks and to bring in a younger crowd.
At a nice concise 90 minutes, Palm Springs doesn't pack a lot of superfluous moments in because that's just not the movie it is. It is light and funny while still showing a surprising amount of heart. For me it is the summer comedy to see and I'm only partly saying that because I have only seen one new comedy this summer.
Notes: