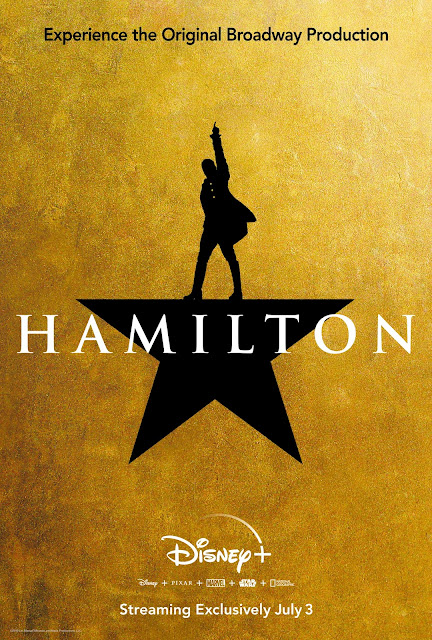 For those that don't know I am also a musical theatre fan. I have been lucky enough to see Hamilton twice but never with Lin-Manuel helming the cast.
In Toronto some were able to get in early to see the show (myself included) but many were still eagerly awaiting future dates for perhaps the most hyped musical in history when the COVID-19 hit. Yes, a global pandemic is larger than seeing live theatre but it didn't detract from the disappointment of maybe never being able to see the show live.
Disney+ has come in to save the day. In the early months of 2020 they had purchased the rights to a 2016 taping of the hit Broadway show and it was set to hit the streaming service October 2021. In the midst of a pretty depressing 2020 so far, it was released early on July 3 just in time for the July 4th weekend.
If you don't know by now, Hamilton loosely follows the history of American founding father Alexander Hamilton and his life.
Don't be mistaken, this show does not speak the whole truth but a dramatic version of the truth. There has been some criticism of the historical accuracy of the show but it made the world want to learn more about his story so I think that is definitely a plus on the history front. Do your own research but you can definitely do it after watching the show.
The made for streaming version was filmed by RadicalMedia across three shows in June 2016 and stitched together. Unlike the original Broadway production, the film is rated PG-13 to adhere to Disney's standards. In order to accommodate this, two f-bombs had to be overdubbed with a mute and a record scratch respectively.

...I literally gave two fucks so the kids could see it:
1. In Yorktown, there's a mute over "I get the f___ back up again"
2. "Southern *record scratch*kin' Democratic Republicans."
You can sing whatEVER you like at home (even sync up the album)!
Love you. Enjoy.
— Lin-Manuel Miranda (@Lin_Manuel) June 22, 2020

Otherwise, the show is untouched from the original version. The film, directed by the show's original director Thomas Kail, runs 2 hours and 40 minutes. It even features King George's introduction to the show and a one minute intermission in between the two acts.
The major advantage of seeing the musical this way is getting different angles and close-ups of the performances. It does provide a new look at details you wouldn't necessarily get, especially if you didn't have great seats. One small disadvantage is not being able to see the whole show at once and how impressive the cast, crew, and set move so smoothly together.
Some tips while watching:
CAST
Although I did see the show live on Broadway, much of the original cast had stepped off the stage at that time so this was a nice way to see the show as it was originally intended.
Lin-Manuel is the clear cut front runner for my favourite Hamilton not only because he embodies his own words but because his rapping leaves nothing to be desired.
Phillipa and Renée, as the main Schuyler Sisters make it seem so effortless, just gliding through fast paced lyrics or belting emotional songs like Burn or Satisfied. The latter really benefits visually from movie editing.
I wish we got to see more of Jasmine Cephas Jones but alas the real Peggy Schuyler died fairly young and Maria Reynolds doesn't have that large of a role.
Chris Jackson is a booming Washington, powerful yet still seemingly a gentle soul.
Daveed Diggs' rapping and hilarious French accent is so enjoyable, personally I love Lafayette much more than his Act II Thomas Jefferson but that's more due to character than actor.
I could definitely go on for the rest of the cast but I am running out of ways to say they were amazing.
Hamilton has a great combination of comedy and drama mixed with the amazing songs written by the genius Lin-Manuel Miranda. As always I cried a few times throughout the show, perhaps most notably during It's Quiet Uptown. What gets me more this time around is seeing a closer view of Hamilton's face as he himself bursts into tears. The whole show gives me goosebumps in the best way possible.
I can't really recommend Hamilton enough but it's not like it's a hard sell. Winning 11 Tony Awards and having the best selling cast album in history you can't really argue with the people.
What may be even more important is seeing a cast nearly entirely made up of people of colour. Especially in this time of political and social unease, in the wake of the murder of George Floyd, and the growing momentum for the BlackLivesMatter movement, this show is certainly just as if not more powerful than it once was.
Lin-Manuel sums it up in a great response to being asked what differences if any would he make if he had written the show in the climate of 2020 (Listen to his whole response to the question it's a couple minutes long).
Notes:
- The credits are around 8 minutes long, featuring My Shot (Rise Up Remix) by The Roots off The Hamilton Mixtape, an instrumental version of Dear Theodosia, and a medley of sort (I think Yorktown, Burn, Non-Stop, and the Exit Music) that I couldn't quite place every part of. It also shows a credit slate for every cast member individually even for the ensemble which was very cool.
- The main cast of Hamilton have done some internet press for the release of the show with videos from BuzzFeed, Wired, and BBC Radio 1 to name a few.