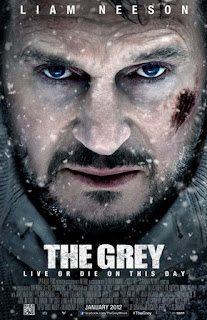 When you are lost in the frigid Alaskan wilderness and are being tracked and stalked by a ravenous pack of wolves, you had better shut up and listen to what Liam Neeson has to say. Now it's not quite as cool as Taken but The Grey (2012) is a little more realistic; something I very much respect when it comes to Hollywood films. Bradley Cooper, Neeson's co-star in The A-Team, was the original choice for the starring role.

Neeson plays John Ottway, a man hired to kill wolves that are threatening the lives of oil drillers in Alaska. It is the last day of work for these men and they board a plane for Anchorage. Something goes awry on the flight and they end up crash landing in the freezing northern wilderness. Only seven men survive the crash, Ottway, Diaz (Frank Grillo), Flannery (Joe Anderson), Burke (Nonso Anozie), Hendrick (Dallas Roberts), Talget (Dermot Mulroney), and Hernandez (Ben Bray). They have no real chance of rescue and have to find a way to survive and get back home. Unfortunately that is just the easy part now that they are being hunted by a vicious pack of wolves.

Filmed in Northern British Columbia they definitely captured some realism instead of chickening out and CGing it which is more than I can say for some movie trash out there. There is nothing too original about a story like this but that being said I did enjoy it and I was rather satisfied with the ending. I wish some of the characters were given a little more development but in movie like this someone is bound to get the short end of the stick. There have been some mixed reviews stating that Neeson has simply been beating up a lot of people in his recent films and that may hold true but I still think most of them are pretty good. Some organizations, namely PETA, started boycotts for the film due to the negative way they portrayed wolves and the fact that the filmmakers used four real wolf carcasses as props for the movie. I believe they probably shouldn't have used real wolves, I mean they used computer animation when it came to the wolf attacks anyway so why not use fake wolf carcasses? What harm to the film making process would it really have done? What's done is done, can't do much about it now.

I would like to add that I loved the score for the film, which was written and composed by Marc Streitenfeld. I think it encapsulated the emotion mixed with the serene calm of the beautiful Alaskan wild.