So I did one of these sort of Valentine's Day movie lists last year but unfortunately toward the end I didn't really write a whole lot and just started to regurgitate some popular rom-coms over the past couple decades.

This year my list won't be obscure per-say but won't really include any movies from last year's list.

I'll be presenting you with 14 movies over three installments. Yes the math doesn't split evenly but doing seven installments of two movies each is ridiculous, so let's not get into that.

These movies are not necessarily the best but are just some I've been thinking of lately or ones that I make me laugh. Also movies like Blue Valentine aren't on my list not because they aren't great but because they are depressing. No one wants to watch a depressing movie on V-Day, that's just a huge buzzkill. For those that are in any sort of relationship some of these may be for you. For those single folk, you can simply watch every one of these movies on the day because, let's face it, you've got nothing better to do. You might think it not possible to watch 14 movies in a single day....I beg to differ.

Forgetting Sarah Marshall (2008) - Sadly I didn't watch Freaks and Geeks when it was briefly on the air but Jason Segel, of How I Met Your Mother fame, comes into his own in a first real leading role. There is pretty gratuitous full frontal nudity as most of you should know so that may be a little awkward depending on your level of commitment with your significant other. Segel is joined by fantastic leading ladies Mila Kunis and Kristen Bell (if you haven't seen her sloth freak out on Ellen click right here, it's adorable, crazy and utterly hilarious all at the same time) as well as comedian Russell Brand, who seems to just play a slight variate of himself. There is a great comedic supporting cast as well but if I get too much into that I'll be typing all day. 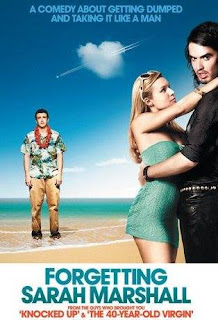 An awesome comedy with a pretty stereotypical ending but it's the solid filler that you want to watch. There are a couple "serious" moments in this movie but are always offset with ridiculous humour so you don't need to worry about that.

My Best Friend's Wedding (1997) - Jules (Julia Roberts) tries to win Mike (Dermot Mulroney), her best friend, back from Kim (Cameron Diaz). Don't think that I've spoiled the plot for you, it's been 15 years since the movie came out and you should know this by now. Besides you get to know those details around 10 minutes in. Rupert Everett who plays Jules' gay friend George is probably the only likable character in the entire movie. That being said the music is pretty awesome, especially the restaurant rendition of Dionne Warwick's I Say a Little Prayer. I've never particularly liked Julia Roberts but I don't really have anything against her. The ending is fair and just, but it also makes you feel pretty good. 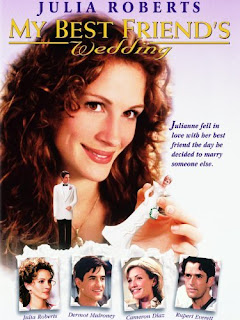 If you're at all annoyed by the stereotypical manipulative nature of females or can't stand either Cameron Diaz or Julia Roberts than this is probably not the movie you'll want to watch with your partner. It'll make you crabby and no one wants to live with that.

Crazy, Stupid, Love (2011) - One of last year's best rom-coms in my opinion, I can't really think of a better one at the moment but there were a couple good ones in 2011. Steve Carell is hilarious as usually but in a rather serious situation. He brings the humour that is sometimes necessary when dealing with separation from his wife Emily (Julianne Moore), but in a tasteful way.....well mostly tasteful. Ryan Gosling has been the straight lead man for a number of years now and it's good to see him in a more light-hearted supporting role, it's takes some of the pressure off and he's a lot more free to show his comedic chops. He gets help in his scenes by the increasingly popular, delightfully charming, and funny in a weird way, Emma Stone. I think the acting of the younger kids, especially between Jessica (Analeigh Tipton) and Robbie (Jonah Bobo) is pretty underrated, not that it was particularly great but it was definitely a lot more enjoyable than most of these types of movies have to offer. Moore never really seems to age but I think her skin is just so pale that no one ever seems to notice. We also see great minor roles by Marisa Tomei, who is also ageless (she basically hasn't changed since My Cousin Vinny) and from Kevin Bacon who plays David Lindhagen (a name you hear much too often throughout the movie). 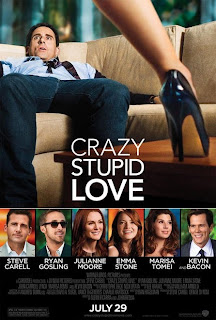 Bottom line is that this is a funny, real (relatively) and heart-warming movie. I'll probably amend my first statement and say that Crazy, Stupid, Love was the best rom-com of 2011 and I watched quite a few.

Note: For those who may not know, Ryan Gosling spends a decent amount of time with his shirt off showing his ridiculous six-pack. Guys, try doing some exercise before watching it with your partner, it'll make you feel less insecure.

Flipped (2010) - When you think of romantic movies you don't really picture school children as the love interests. Flipped provides a good detour on that sort of thinking providing a wholesome, family friendly, late 50s love story. In 1957, when 7 year old Juli Baker and Bryce Loski meet, Juli knows it's love at first sight. Bryce on the other hand is more than a little freaked out and tries to avoid her kind of cute but more or less stalker-ish persistence. As the years go by he continues his aversion to her but to no avail but soon things start to change and the odd and confusing relationship Bryce has with Julie Baker is flipped upside down. 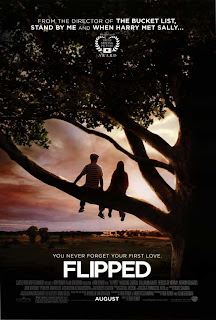 I know I didn't really do much of a plot summary for the other movies but that's okay. Flipped stars Callan McAuliffe as Bryce and Madeline Carroll as Juli. I'd say that besides Bryce's grandfather Chet (John Mahoney) there aren't really any other memorable characters. Directed by Rob Reiner (When Harry Met Sally and The Princess Bride amongst many others), you just know it'll be chock-full of romantic goodness.

Joe Versus the Volcano (1990) - This is the only movie on the list that I actually haven't seen yet. It's on my computer I just haven't gotten around to watching it yet. Since it's release in 1990 it has gained significant cult following (probably along the lines of So I Married An Axe Murderer(1993)) but garnered a rather disappointing box office gross. It is the first of the Tom Hanks and Meg Ryan rom-com trilogy. For those that are tragically unaware, the other two are Sleepless in Seattle (1993) and You've Got Mail (1998). I love the dynamic between Tom and Meg throughout the years but where Tom has been pretty steady and always relevant in the acting world, Meg seems to have dropped off, not doing much that's notable in recent years. Also, since she got some plastic surgery done, she kind of looks like a scary cat so I'm not the biggest fan these days. 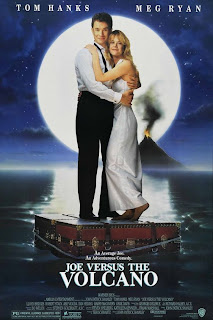 From what I've read about the plot it seems like it might be a little hard to follow at times, but I'd say just watch it. Watching it with another person would be better for two reasons. One, because you happened to find someone to spend V-Day with, and two because it might help to have another brain following the plot just in case you miss something.

There still are more movies to come, that I hopefully get done before the day....unlike last year when I got lazy and finished it like Feb 20th or something.....