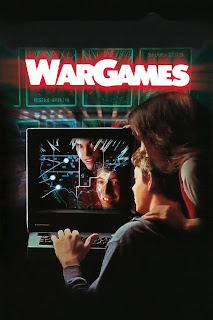 A few years before he was known to everyone as Ferris Bueller, Matthew Broderick played a high school computer hacker in 1983's WarGames. This movie would be the first major stepping stones for both Broderick and his co-star Ally Sheedy, who would later go on to join the ranks of other great 80's actors in the Brat Pack.

Summary:
Broderick plays David Lightman a high school slacker but gifted computer whiz. After both he and fellow classmate Jennifer Mack (Sheedy) receive failing grades in Biology, David hacks into the school computer and changes their grades. Later, Jennifer comes over and inadvertently helps David find the backdoor into NORAD's central military computer, thinking it's a game. They start playing a military war simulation, not knowing that at any moment they could start World War III.

Cast:
There are a couple of supporting actors that stand out to me (not all of them but the ones that caught my eye when I watched it):

John Spencer (Leo McGarry from The West Wing) as Jerry

I always think it's fascinating looking back to the very beginning of any actor or actress's career and see how they got their start in the industry. I can even see some pretty remarkable differences between both Broderick's and Sheedy's roles in WarGames and those in the movies that made them the most famous (Ferris Bueller's Day Off and The Breakfast Club respectively). As unrealistic as this movie is (as was just about everything else in the 80s) it really is a great film that gave two young kids a huge break before their work with the great John Hughes.

Notes:
- This was filmed way back in the day when they still had the old floppy disks. For you young'uns out there, this was before CDs, before 3½ inch floppy disks, and even before 5½ inch disks. These were the big ones, the 8 inch floppy disks.
- You'll notice Eddie Deezen's part right away if you have ever seen Dexter's Lab because he sounds exactly the same as Mandark.