So here we go again with the second installment of a rag-tag bunch of movies I've watched lately that could apply to Valentine's Day.

It's Complicated (2009) - You can't get a much better pool of talent than Meryl Streep, Steve Martin, and Alec Baldwin but when the hilarious John Krasinski (Jim from The Office) is thrown in there, you get a little something extra for those who may not appreciate the fantastic, but aging, star power.

When the divorced couple Jane (Streep) and Jake (Baldwin) come together for their son's college graduation things start to become a little difficult to handle when they start having an affair. Jane's soon to be son-in-law Harley (Krasinski) catches on to the affair but has to keep it a secret despite the intense awkwardness of it all. The incandescent Jane has also caught the eye of a quiet and respectable architect Adam (Martin). Simply put, it's complicated. 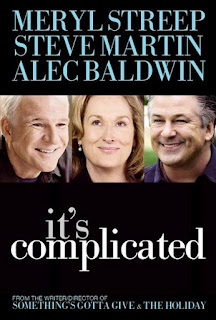 Yeah it's cheesy line to write at the end of that summary I know. I think I like Steve Martin more when he's more outgoing with his comedy but he is getting older and can pass some of it along to young guys like John Krasinski. Meryl is amazing as she always is, with a ridiculous 17 Oscar nominations under her belt, it's hard to not to be. Alec Baldwin rounds out things nicely (literally, he was a little chubbier then). Although some parts of the movie seem a little forced, it is a rom-com so it's to be expected. Despite it not being a classic there are plenty of laughs and great chemistry amongst the stars. Besides there's a scene where Alec Baldwin smokes a joint then shotguns the smoke into John Krasinski's mouth, what's not to love?

P.S. I Love You (2007) - I don't care if you give me crap on this one, I like it so that's all that really matters. Some people don't like Hilary Swank, I don't mind her, I don't get overtly excited when I see her on screen but I respect her as an actress. Also, I haven't read the book so I can't really compare which one was better but from what I hear the book was (books always seem to be better). I thought there was pretty good chemistry between Hilary Swank and the Scottish heartthrob Gerard Butler. I'm used to seeing Harry Connick Jr. as very suave and confident whereas his character Daniel embodies none of that, so that was a little odd. Jeffrey Dean Morgan did a pretty good job but he wasn't a convincing Irishman, he's just too American. 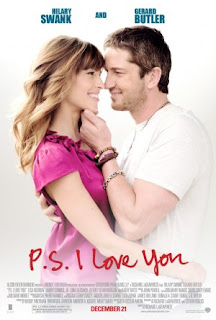 For those who don't know this story by now, Holly (Hilary Swank) and Gerry (Gerard Butler) are married and are kind of stuck going nowhere, saving for a house and eventually kids. Gerry dies and Holly has to learn to live without him. Those aren't spoilers so quit your whining.

Note: The Irish accents in this movie aren't as bad as people say they are....but they aren't very good. Also for anyone who is a Grey's Anatomy fan might find that when Jeffrey Dean Morgan arrives on screen they start openly weeping because they only know him as Denny.

Friends with Benefits (2011) - This movie is pretty self-explanatory. Jamie (Mila Kunis) is an executive recruiter in New York who has convinced Dylan (Justin Timberlake) to work for GQ. Since Dylan is from the sunny city of Los Angeles, he quickly forms a friendship with Jamie, the only person he knows in New York City. After having trouble with relationships in the past both of them agree to simply be friends with benefits. 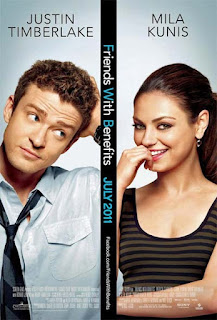 In my opinion, far better than No Strings Attached which was also released last year and has pretty much the exact same concept. Mila and Justin have more of a connection than Ashton Kutcher and Natalie Portman. I also think Mila is sexier (although Natalie is beautiful, and a better actress....no offense Mila) which suits this type of sex comedy a little better. I love Patricia Clarkson as an actress she seems to be right at home when it comes to comedies.

For the record I think that the whole friends with benefits may seem good in theory but it never ends well. It's just bad news, as much as we may like the idea.

Can't Hardly Wait (1998) - One of my favourite teen movies that wasn't made by John Hughes. It takes place a high school grad party, where everyone was invited. Although I don't know anyone who has ever been to a high school party where it seemed every single student was there, if you know anyone who has, let me know. This party is the last chance that Preston Myers (Ethan Embry) has to profess his love for Amanda Beckett (Jennifer Love Hewitt). Preston's best friend Denise (Lauren Ambrose) is reluctant to go but does so to support him. Kenny Fisher (Seth Green) is a white-boy trying to hard to be cool and vows to lose his virginity before the night ends. William (Charlie Korsmo) also has a plan for the night, to take revenge on the popular jock Mike Dexter (Peter Facinelli) for all the crap he's taken from him over the years. 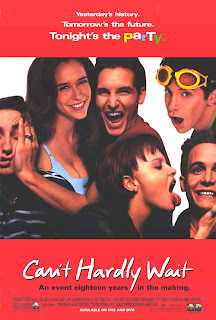 There is so much more going on in this movie than what was briefly described above but that's the point, you need to watch it to see everything. I could be typing forever describing this movie. It was around the start of a lot of actors careers but I don't any of them are particularly known for this movie.

There is also a short cameo by Jerry O'Connell who first got his break in the 1986 drama Stand By Me as Vern.

Roman Holiday (1953) - Let's take it back several decades to the poise and beauty that is Audrey Hepburn. This was Hepburn's first major film role and she starred opposite gallant leading man Gregory Peck.

A young European princess (it's never really established from where) is on a long tour of European capitals when she stops off in Rome. One night she gets fed up with the detailed structure of her life and decides to wander off to explore the wonders of Rome on her own. She meets American reporter Joe Bradley (Peck), who doesn't recognize her, and that begins an intriguing journey that leads them exploring the wonders and beauty of Rome. 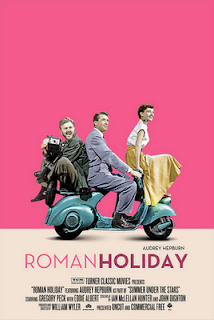 Movies are just not made like this anymore, I mean it's in black and white but that's not what I'm talking about. Hepburn brings her innocence and naivety to the film to complement Peck's calm and charmingly stoic demeanor. Eddie Albert who plays Joe's friend and photographer Irving, brings great comedy and balance to the film.

Hepburn won the Oscar for Best Actress in her debut film where the film went on to win an additional two. Also, Hepburn is one of just 11 people to have won an Emmy Award, Tony Award, Academy Award, and Grammy Award in competitive categories. She joins Gregory Peck on AFI's 1999 list of the 50 greatest screen legends of American cinema.

Here ends part 2 of this year's list and tomorrow...or maybe later tonight (although I doubt it) I'll finish the list that features a couple animated movies that will leave you a little weepy, but in a good way.