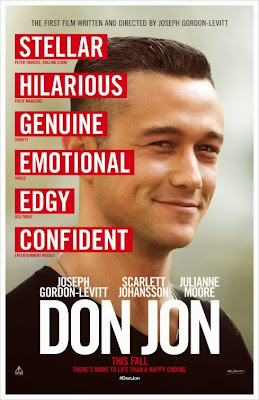 Unrealistic expectations are the downfall of too many relationships. Men tend to always look at how women have fantasies created from romantic films that seem to put unwanted pressure on them. How can men possibly be a Prince Charming? What we don't seem to get is that we put the same sort of pressure on women when media helps us form an image of what we think is the "perfect" woman. Unfortunately for Don Jon, his expectations connect more with the women he sees in pornography.

Scarlett Johansson wasn't particularly brilliant because her character didn't evolve throughout the film unlike Jon who became a much more complete person by the film's conclusion. Julianne Moore does a wonderful job as usual in a role that I didn't quite expect from the get go. I think it's better if you don't read too much into the movie before seeing it, as it goes with just about every movie, but it's better if it surprises you. Jon's family is really fun to watch. Glenne Headly and Tony Danza play his parents and Tony is great to watch on screen again. Brie Larson portrays his sister and she literally only has one meaningful line in the movie but it's a good one. The rest of the time she has her head cocked to one side engrossed in the screen of her cell phone.

Obviously I'm a big Joseph Gordon-Levitt fan, huge man crush. He's a talented dude. He wrote, starred in, and directed this film and that is only one of the reasons he's one of the biggest stars in Hollywood these days. Don Jon is a great film, not family friendly and may offend the faint of heart but it has a good message. Love and relationships aren't about being selfish, it's a two-way thing, you have to give as well as take. A great point was brought up in an interview between Jake Hamilton (an underrated interviewer) and Gordon-Levitt. Jake made the apt observation that the film was a sort of indirect companion to (500) Days of Summer. Both Jon and Tom are very selfish characters, albeit in very different ways, but they see the error of their flawed perception of love and change for the better.

Now I didn't read this post over and I wrote it all out of order so if it doesn't make a lot of sense here is the gist of it. This is not a family friendly movie. If you don't like what porn looks like, even the....non-penetrative parts...then this movie is also not for you. If you like to laugh, even at the Jersey accent that I'm pretty sure they may be mocking, go watch it. Not trying to offend, just lending my humble opinion, but the Jersey accent....not so hot. If you want to see an interesting story with a good moral this is for you.

For you deluded dreamers out there men and women, after seeing this movie take a good long look at how you view love and the opposite sex and check to see that you have everything in perspective. If you don't, you had better do something about it. Go check it out.

Notes:
- Poster image obtained from www.impawards.com
- The fake movies that Jon and Barbara are choosing between in the theater are an action movie and a romantic film. The romantic film stars Anne Hathaway and Channing Tatum and there is a great montage of the movie that is summarized in the film; a movie within a movie. A nice nod to Inception which was a big step into bigger budget roles for JGL.
The action movie stars Emily Blunt and John Krasinski, although we never see any part of that movie.
- Emily is credited as Kelley Vallette, a production assistant and John is credited as Bruce Blackstone a driver, both working on the film.
- The interview between Jake and Joe can be seen here.