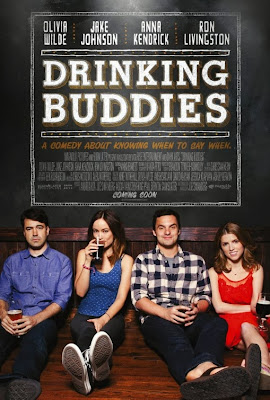 Drinking Buddies is a drama that happens to be comedic based on the characters more so than their situations. Luke (Jake Johnson) and Kate (Olivia Wilde), are two friends who work together in a brewery together that have amazing chemistry. Yes it would be cliché that they eventually see the other in a different light and it all comes out hunky dory and they live happily ever after in the end. Thankfully this is not that kind of movie, even if it might seem that way. It doesn't really throw any twists though so you won't be shocked by any part of the story but its still a good watch.

I love Jake Johnson and Olivia Wilde playing off each other. It seems like that sort of friendship could actually happen with those two people in real life. Obviously they wouldn't be movie stars and thus would be far uglier. It is a nice small cast so we can get more screen time with each. Ron Livingston plays Chris, Kate's boyfriend and Anna Kendrick plays Jill, Luke's girlfriend. Ron brings a profound awkwardness that is sometimes off putting to sit through but is exactly what his character is about. He doesn't get a large chunk of screen time but he does well with what he gets. I do like Anna but her performance and how the character was written didn't wow me. Her character lacked any real....well...character. We basically just saw an emotionally fragile girl who wants to get married and is nudging Luke towards it because she is too afraid to make any sort of disruption. I guess Anna could only do so much with such a character.

I really enjoyed the movie. It was simple, low budget, and it didn't have too many cliché moments. Yes they do go through some romantic struggles wherein they may learn to see the other differently but it's definitely not what you think. Not to spoil anything but it's called Drinking "Buddies" for a reason. It paces a little slow so despite only being 90 minutes it seems like a much longer movie. That being said I really liked it. It was good to see this kind of story told. I'm glad writers are still able to find ways to creatively avoid a generic rom-com of a story.

I especially enjoyed what was said in the very last scene of the movie. You'll know what I'm talking about when you get there.

Notes:
- Poster image obtained from www.impawards.com
- Jason Sudeikis who plays Gene, who I assume to be some sort of manager, is engaged to star Olivia Wilde
- Although the image above shows Jake Johnson clean shaven, at no point in the movie is that true. Must have been an old poster.