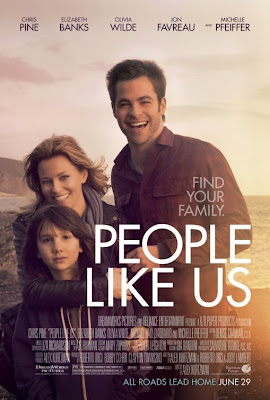 Sam Harper is struggling with the debt in his life until his estranged father passes away. He leaves Sam $150,000 that he must give to the son of the half-sister he never knew he had. Sam has to work through his inner issues and find a way to tell his sister exactly who he is.

People Like Us gives us their fair share of very sincere touching moments mixed with a few that fall flat trying to pull at your heartstrings. They try a little too hard with the dramatic lighting or the cheesy climactic songs and crescendos. Sometimes we see a strange romantic vibe in some of the scenes. Whenever the lead actor and actress are thrust into situations like hanging at a laundromat, going out to lunch, and going for a drive around the countryside, things get a little ambiguous. I think the set up just gravitates naturally to what we normally see in romantic movies. Basically what I'm saying is that you could take this nearly two hour movie about a brother and a sister, cut out about 30 minutes, and someone could mistake it for a romantic film....which is weird.

Michelle Pfeiffer and Olivia Wilde do respectably but nothing too notable. I definitely watched this movie for the story and the chemistry between Chris Pine and Elizabeth Banks. It really seems like they would be friends in real life, although there were a few missteps that seemed a little off throughout the movie. I'd pinpoint them for you but that would spoil things and I just don't want to.

Michael Hall D'Addario is a cool little kid and some people will say he can't succeed in the business because he looks a little funny but hey look at Steve Buscemi. However, I do have one tip, cut your hair man. I know you're a tween or something and long hair is apparently cool (again?) but when you and your friends look like girls from behind you should just cut it, even just a trim. Besides short hair is easy to maintain, it's awesome. Enough on that tangent.

Ultimately, a decent enough movie, nothing super special but a nice story that makes you feel good watching. Something you can watch with your family, or just to pass the time.

The movie is available here, and it's totally legal.....

Notes:
- Poster image obtained from www.impawards.com
- Alex Kurtzman and Roberto Orci are young writers/producers (and now directors with Kurtzman's debut with this film) who have broken onto the scene working on movies such as Star Trek, Transformers, Mission: Impossible III
- Mark Duplass and Jon Favreau are in bit parts but don't add much
- Inspired by true events is flashed over the opening credits. Basically Kurtzman met his half-sister when he was 30 and Orci's father-in-law is a prominent songwriter in the business and all of the memorabilia in Jerry's