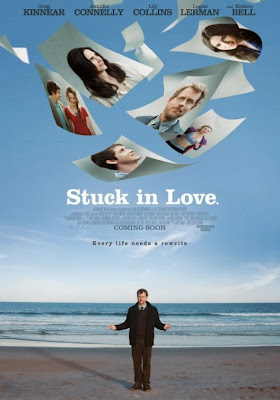 Bill (Greg Kinnear) is a moderately famous writer who has been divorced for a couple years. His ex-wife Erica (Jennifer Connelly) married another man and their family isn't functioning quite as they planned. The romantic story between these two is pretty standard, well actually it's pretty much all standard but it covers a few bases as it follows three different stereotypical romance story lines. Man and wife, break up, man waits, gets back together with wife. Boy falls for troubled girl to try to straighten her out....actually that one just comes up twice in this movie. Oops....I guess *spoilers*? It doesn't matter it's a romantic film you know what's going to happen.

As much as Stuck In Love has a derivative plot, the characters are pretty likable and so you just want to keep watching. Greg Kinnear plays the middle-aged bachelor and you can't not love him. Kristen Bell has a small and nicely rounded role as Bill's.....special friend. Jennifer Connelly is sad and pathetic just like her character is supposed to be. Relative newcomer Nat Wolff (I've only seen him in Admission, which was not a good movie) does a good job as Bill's son Rusty but he needs to sharpen his skills which will come in time. Liana Liberato is the troubled Kate that wins Rusty's heart. Nothing too special there. Logan Lerman really won me over in this one. I haven't liked him much up to this point but in The Perks of Being a Wallflower he started to sway me and now I'm definitely a fan. He is pretty damn smooth playing Lou opposite the incandescent Lily Collins, as Bill's confused and promiscuous cynic of a daughter, Samantha. It was my favourite romantic pairing of the movie. Something about Lily Collins just gets me. It's kind of like the fascination everyone has with Emma Watson, same effect.

In any case this is a combination of basic formulaic rom-com plots and pairings with a great cast. Not all stars which makes for good chemistry. It just makes me smile when I find another one of these I can add to a list of movies I like to watch on a particularly gloomy day to cheer me up. So ultimately nothing special but worth watching.

Did you notice that I told you virtually no details about the movie? It's what I do, I've gotten very lazy with these and I'll have to shake things up a bit....but that will come later.

You can find the movie here.

Notes:
- Poster image obtained from www.impawards.com
- I didn't even recognize Spencer Breslin as Rusty's friend Jason, he's definitely grown up since his younger roles but sadly he hasn't done too much.
- If you don't know by now, Lily Collins is daughter of former-Genesis drummer (amongst many other things) Phil Collins.
- Patrick Schwarzenegger (son of Ahnuld) plays Kate's jackass ex-boyfriend Glen
- Stephen King's voice only part was voiced by the actual Stephen King. I mean there's no point in not getting him so it pretty inconsequential and barely even note worthy.....