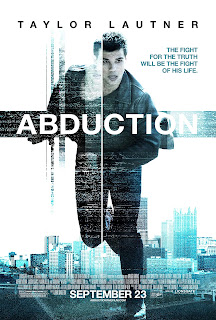 I usually just write posts about the movies I like but I thought I'd show that I can dislike movies too.

For some strange reason I chose to watch Abduction (2011) starring Taylor Lautner and Lily Collins. I thought I'd give Taylor a chance, despite his Twilight connections. For example, despite being in High School Musical, I was pleasantly surprised watching Zac Efron do pretty well in 17 Again, taking on quite a few of Matthew Perry's mannerisms. Sadly, this attempt at a blockbuster, action-thriller fell pretty short of any sort of decent.

The premise of the movie, if you care at all, is that Nathan (Lautner) is a regular teenager but one day finds a photo of himself as a kid on a website for missing children and learns some shocking details about his life and his parents.....Actually I don't even feel like telling you much else....crooked CIA agents, Serbians, predictable plot, fighting, Taylor taking his shirt off....that's about it. There was no real potential for this movie, I'm not sure what I was thinking. These types of movies have been overdone but have been done much better. It kind of reminds me of a poor attempt at a Bourne movie.

If Taylor wants to be known as something other than the shirtless werewolf from Twilight, he's got to step his game up. Honestly the only person this movie helped in my opinion is Lautner's co-star Lily Collins (daughter of Phil Collins). She didn't do a great job in the movie, but all she needs to succeed in this business are her sweet, innocent, girl-next-door looks and for people to know who she is. It's sad but true.

The thing that irks me most about this film is that there was so much wasted talent in supporting roles. Jason Isaacs and Maria Bello play Nathan's parents but the roles aren't very substantial. Sigourney Weaver is in a few scenes and she is such a great actress but it doesn't seem like she cares much being in this movie. I don't blame her. Dermot Mulroney made a short voice cameo (and the bottom half of his face) but I never really liked him so we can skip over that. I love Alfred Molina but he made a poor choice when accepting a part in this movie. He's a great actor but doesn't get to do a lot in this case. I honestly just watched an interview clip from when he was on The Late Late Show chatting with his good friend Craig Ferguson and it made it worth watching this movie just for the fact that it reminded me today how awesome Fred Molina is.

On that note here is the clip just to make it worth actually reading this post.

So the point I'm trying to make here is don't waste your time on this movie. Maybe in the future if I see it on TV, I might watch sit through it....if the news isn't on or something.