I have a bunch of posts half done but haven't really had much motivation to finish them. I watched this yesterday and I thought it was pretty good. 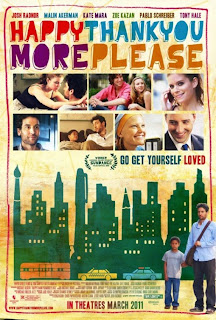 happythankyoumoreplease is a film about several almost-30-year-olds dealing with the problems life has thrown at them.

I've seen a lot of negative reviews for the movie and many of them touch on some valid points. Some said the writing was poor, some said the dialogue was flat, some say it was too much like a sitcom (which I can agree upon to a certain degree). With all this being said I really liked happythankyoumoreplease (2010). I'm not sure if it's because I'm a How I Met Your Mother fan and the film stars, and is written and directed by Josh Radnor, but I didn't really find too I didn't like about the film.

Truthfully though, the movie is flawed but I think that's the whole point. All of the characters in the film are flawed in different ways and you get to see them evolve into better people or at least slightly more likable ones. I found the movie the same way. It was definitely weird at certain times but I liked all the characters and the story more by the end of the film. Maybe it's just me, I don't know. There were some scenes that were kind of awkward but Josh Radnor is kind of like that.

Radnor plays our protagonist Sam Wexler, a New York city writer trying to publish novels with little success. His life is pretty much a mess when we first meet him and honestly it doesn't change a whole lot by the end but there's some change. His "cousin" Mary Catherine (Zoe Kazan) and her long-time boyfriend Charlie (Pablo Schreiber) also see some trouble when he wants to move to L.A. but she wants to stay in New York. Sam's best friend Annie (Malin Akerman) suffers from Alopecia and is dealing with a kind of overbearing yet adorable co-worker Sam #2 (Tony Hale). Sam Wexler's life is changed one day when he meets two strangers; a gorgeous waitress and part-time singer Mississippi (Kate Mara) and Rasheen (Michael Algieri), a boy that gets separated from his family on the subway.

I admit this movie isn't for everyone and many people probably wouldn't appreciate it in the same ways as I do. If you're bored, prepared for possible disappointment but hopefully a pleasant surprise, and want to see Josh Radnor's directorial debut in which he plays a more mellow version of Ted from HIMYM then happythankyoumoreplease (2010) is the movie for you.


Notes:
- Kate Mara is sexy and adorable as always.
- Malin Akerman looks really weird without hair.
- Michael Algieri is such a cute kid.
- Zoe Kazan does not look like she's almost 30 and she kind of reminds me of a sad puppy throughout the whole movie. Maybe it's the eyes.