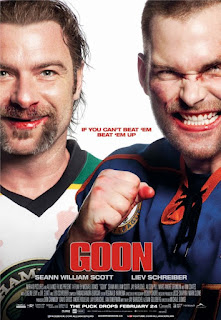 If you like hockey movies with flashy moves and dramatic goals, this isn't the movie for you. If you like big angry guys beating the crap out of each other, you should take a look. Besides it's a good Canadian made movie, it's not too often those come around.

I really enjoyed Goon (2012). It's a movie about Doug (Seann William Scott), a dim-witted but kind-hearted underachiever, who gets a crack at playing hockey for the sole purpose of being a goon and a fighter. Most of this movie is pretty believable, I mean they don't go too overboard like actually have him play in the NHL which is nice to see that they like to keep some realism. Liev Schreiber plays Ross Rhea, an aged veteran enforcer who has been suspended from the NHL and demoted to minor league hockey to finish his career where he started it. Liev is sporting a pretty epic handlebar moustache of which I strongly approve.

There are also some great Canadian actors in the supporting cast, which is nice to see in a Canadian film. Jay Baruchel plays Doug's highly inappropriate, yet supportive best friend Ryan. Jay's character is pretty much the douchiest I have seen in a while but it's pretty entertaining....I guess. Eugene Levy plays Doug's very serious father who is pretty much the biggest buzzkill ever which is a shame because Levy is a comedic genius. Alison Pill plays Doug's romantic interest Eva. Some may think Alison Pill of is kind of weird looking and to be quite fair she kind of is, but she is also adorable in a lot of different ways, plus she's from Toronto so that's gotta count for something.

There are plenty more great actors that round out the cast but you probably wouldn't care if I told you.

Lastly I would like to point out that the nice guy/tough guy/hockey player (which is usually reserved for Canadians) Doug is actually American. I'm proud of the great legacy Canadian players have in the world of hockey but it's nice to see that our neighbours to the south get some respect too. They had Miracle (2004) and The Mighty Ducks Trilogy but we've been ultimately more successful when it comes to hockey.....so I guess we're even.

If you like more realistic violence when you watch movies this movie is a great one for you. If you are against that sort of thing or just don't like fighting in hockey (which I can understand) then you can probably skip this one. It's playing now so you should go check it out, if you can't you're not missing anything mind blowing but you should definitely watch it sooner rather than later.

Note:
- Goon (2012) is an adaptation of the book written by Adam Frattasio and Doug Smith, Goon: The True Story of an Unlikely Journey into Minor League Hockey.
- This movie was filmed in Brandon, Portage La Prairie, and Winnipeg, Manitoba. Gotta love it just for that reason alone.
- There is also a nice cameo by retired NHL enforcer Georges Laraque. If you have ever seen Georges Laraque play and/or fight you know he would take both Schreiber and Scott down easily without breaking a sweat but it's all for the movies. From what I've seen of Georges he seems like a nice guy. His banter before his fight in the movie apparently is pretty accurate to how he approached fighting in the NHL.


Check out Georges in action.