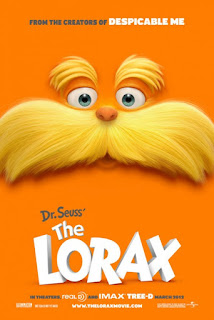 Despite far exceeding the target age for movies like this, I always seem to enjoy them. I've read that some parents say it's too scary for their children but I don't really see that. To be fair I'm much older but I didn't see it as that intense a movie. Quite honestly not a whole lot actually happens. There are a lot scarier kids movies in my opinion, like Toy Story 3 with the creepy monkey toy.

A lot of big time names lend their voices to Dr. Seuss' The Lorax (2012). The story's protagonist, a young boy named Ted is voiced by Zac Efron, while his high school crush Audrey is voiced by Taylor Swift. Two great young talents that will definitely draw in some audiences from different age groups. Ted's grandmother is played by the magnificent Betty White and the villain, Mr O'Hare is voiced by Rob Riggle, who is annoying most of the time but this role suits him pretty well. The story within the story features The Once-ler voiced by Ed Helms and The Lorax himself, played perfectly by Danny DeVito.

Straight from IMDb: (because I'm just that lazy)

A 12-year-old boy searches for the one thing that will enable him to win the affection of the girl of his dreams. To find it he must discover the story of the Lorax, the grumpy yet charming creature who fights to protect his world.

Honestly, the main story itself wasn't very exciting but I found the interactions between the Once-ler and The Lorax much more entertaining. You really don't need to pay attention to the story but I very much enjoyed the musical numbers, they made me feel good and they are catchy.

It's a great movie for kids and I don't think it's scary at all. If your kid is old enough to know whats going on and is still scared of The Lorax then perhaps it's time to accustom them to the real world....or maybe I'm just horribly desensitized, either one. If you're anything like me, you'll enjoy the movie. It's cute and feel good but other than that it's nothing too special but I'd still watch it again. If you only like to watch action movies or raunchy comedies then it'd probably be best to avoid The Lorax.