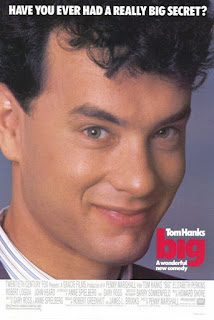 It's been a little bit since I've done one of these so I'll try to catch up. We have (finally) come to the second genre in AFI's 10 Top 10 List. Here we start with Big (1988), one of many great movies from the amazing Tom Hanks.

Tom plays Josh a 12 year old boy who, with the aid of a machine featuring Zoltar, wishes he was 'big'. In the morning he is shocked to find out he is in a 30 year old body. He attempts to go about the life of a 30 year but being rather inept at just about everything that an adult does, he seems to succeed. Funny how that doesn't work in real life... Anyway he gets involved with Susan (Elizabeth Perkins), an executive at the toy company he now works at, and he gets entrenched deeper and deeper into the life of the adult he has become. He starts to miss life as a kid (who wouldn't?) and returns to the machine that turned him big and returns things to the way they were.

Not really important to the overall plot but Robert Loggia plays Josh's boss at the toy company. I love his supporting parts in film but for those that do not know who he is, Family Guy can help you with that.

There were apparently a lot of age-changing comedies made in the 80s but I've never seen them so I'll recommend this one. If you're not into older movies (80s movies = not that old) I'd opt for 17 Again (2009), the only decent one I've seen since Big.

Notes:
- Directed by the wonderful Penny Marshall
- For fans of the movie 13 Going on 30 (2004) starring Jennifer Garner, this movie is exactly like that but with a few expections:
- It's from the male point of view
- Unlike 13 Going on 30, our protagonist does not travel into the future
- It doesn't suck
- This movie marked Tom's first nomination for Best Actor at the Academy Awards